St Francis Bay publisher and publishing facilitator, Write-On Publishing, has just delivered a consignment of the book “The Sea Shells of Jeffreys Bay” to the Jeffreys Bay Shell Museum.

So what? you may ask.

What makes this delivery special is that the little book, by Douw and Elise Steyn and originally published in 1999, was totally out of print! The original publisher/printer no longer exists, and the original content material – colour plates and text – was nowhere to be found.

Petro Meyer of the Humansdorp Museum Association, curators of the Shell Museum, takes up the story:

“When the Humansdorp Museum Association first became involved with the Shell Museum, a knowledgeable “Shell lady”, Susan Hammond, was appointed to assist in the museum.  She mentioned that visitors were enquiring about the book, of which, at that time, the Museum possessed only one copy, which was being used to assist visitors and locals who wanted to know more about a specific shell,” said Petro.

“After a search, we found a number of copies in a local shell shop and bought most of their supply.  We found that they were selling quite well, and when we began to run out, we looked for more copies, only to find there were none. We contacted the author, Professor Steyn, and he gave us permission to reprint the book. The Tourism Department of Kouga Municipality assisted with the printing cost of the book to ensure that the book would still be available for locals and visitors.

“The original printers had unfortunately closed down and that made the whole process more complicated as it meant that the book had to be redone from scratch. This however created an opportunity to do some corrections, as with more modern technology available, the classification of a few shells had changed since the time of the original publication and the new classifications could be included.

“A number of quotations were obtained, and the museum committee decided to ask Frank Nunan of Write-On from St Francis Bay to assist with the re-production of the book. His price was very competitive, and this was in line with the Museum’s policy of making use of local people and companies where possible. It also simplified the process as it was possible to have the odd meeting to discuss questions from either side.

“Prof Steyn agreed that the Humansdorp Museum Association would take over the copyright to the second edition to ensure that no unauthorised copies of the book would be distributed. The museum agreed to pay a small royalty to the author. The new edition has a brand-new cover that was designed by Frank to make it easy to distinguish from the original one.

“The whole process was quite painless, and the end product is of excellent quality.”

While the process might have seemed painless to Petro, publisher Frank Nunan was faced with a number of challenges:

“I only had a printed version to work from and this was a huge problem when it came to the quality of the colour plates – reproducing printed colour pictures almost invariably leads to pixellation and a grainy appearance. However, I am pleased to say that I was able to scan and enhance them digitally to the extent that they are barely distinguishable from the originals. The text was scanned using OCR (Optical Character Recognition) technoloy, and this also presented a few challenges. A very small typeface had been used, and as the original print quality was not very good, ink runs had occurred, causing some interesting results from the OCR scans – “rn’s’ became “m’s”, just for example. This meant very intensive proofreading and correction was needed. The fact that much of the original text was in Latin made this even more fun,” said Frank.

The Humansdorp Museum Association is already planning its next book revival project: the reprint of “Humansdorp se Groei and Bloei 1849-1975″.  Permission has already been obtained from the children of the original author, E J Gerryts. 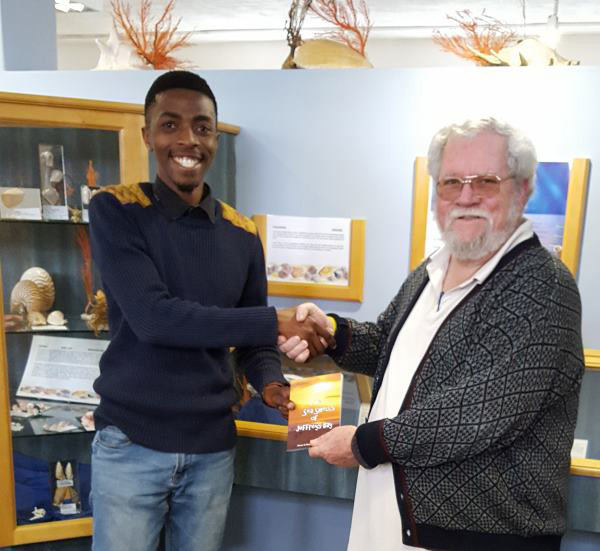