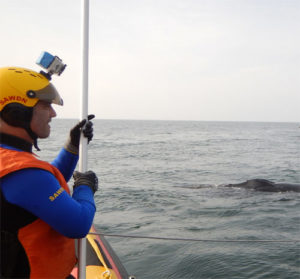 A dive charter boat had located the whale and remained with the whale to mark its position pending the arrival of SAWDN.

SAWDN volunteers, on an NSRI East London sea rescue craft, reached the scene and Marine scientists examining images of the whale confirmed the whale to be in poor health and unlikely to survive.

SAWDN volunteers, using the SAWDN specialised cutting equipment, were able to free and recover fishing rope that was entangled around the whale.

The whale remained still and calm throughout the operation to cut the fishing gear free.

There appeared to be no adult or parent animals in the vicinity.

Once free the whale did appear to show some signs of renewed strength despite the poor state of health.

After the sea rescue craft veered away from the whale it appeared to continue to head in the direction of the adult whales.

While SAWDN are not optimistic to the survival of this whale we are non the less hopeful for its survival.

SAWDN commend the East London ski-boaters for their alerting us and we commend the dive charter boat who marked the whales position until SAWDN arrived.