What a weekend in St Francis

What a weekend in St Francis and a little further afield

The weekend kicked off early with the ‘Meet the Teams’ function at Cape St Francis Resort. The Sea Vista Marimba Band set the mood with their energy and even had a member of the Japanese Expedition Africa team joining ig the dance antics of this vibrant group of youngsters that have improved in leaps and bounds since their recent return from China.  It was great to see the support of the local community joining in the celebration of what is undoubtedly the biggest event yet hosted in St Francis. Let’s hope this encourages other big event organisers to look at St Francis as a potential host to their event. Possibly golf’s SA OPEN?

Come Saturday morning and all the participating teams in Expedition Africa gathered on our beautiful Cape St Francis Beach for the Flag Ceremony. From the beach they wound their way, flags aloft and waving, to the Lighthouse.  An awesome spectacle that was enjoyed by a good crowd who had gathered to witness the teams as one by one they laid their team tiles on a map of Africa that will remain in place, hopefully for generations to come.  Those who chose not to make the effort missed a truly memorable event that culminated with Mayor Elza van Lingen unveiling a plaque marking Cape St Francis and the most South Eastern point of Africa. If you did not attend this splendid event you really should take yourself over to the lighthouse and have a look at the memory Expedition Africa team has left behind.

And so Sunday dawned, well not quite, for before sunrise the Expedition Africa teams assembled for the start of this epic race. And before the sun peeked over the horizon the teams came under starters orders and then they were off, 156 souls embarking on an adventure that will take them through some of the most beautiful parts of Kouga including some areas seen by few.

Chasing the race as a spectator was not without its challenges for these guys really get a move on and in no time at all the had run through the port and on to the canals where at last followers could catch their breath as the teams took to kayaks to paddle the canals and up the Kromme then the Geelhout, a paddle that would challenge even some of the more paddling community of St Francis Paddling Club. It was soon apparent that some were more accomplished than others at the art of paddling as the field stretched giving spectators a chance to see the teams in action. 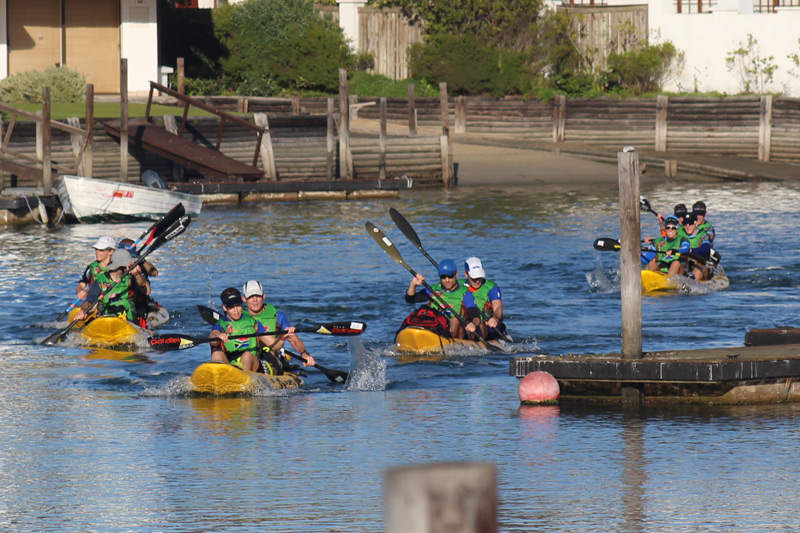 Once out of sight spectating became a little more challenging and required a drive to Checkpoint Two atop a hill above the river valley. Some four hours after leaving the flat terrain of Cape St Francis beach and exhausting paddle, teams had to carry their kayaks up the steep and long climb uphill to the checkpoint before packing their kayaks into supplied bags for onward transportation to the dam where teams would again take to the water but not before a six or seven kilometre run,  back down into the valley and onto the dam at Checkpoint 3. 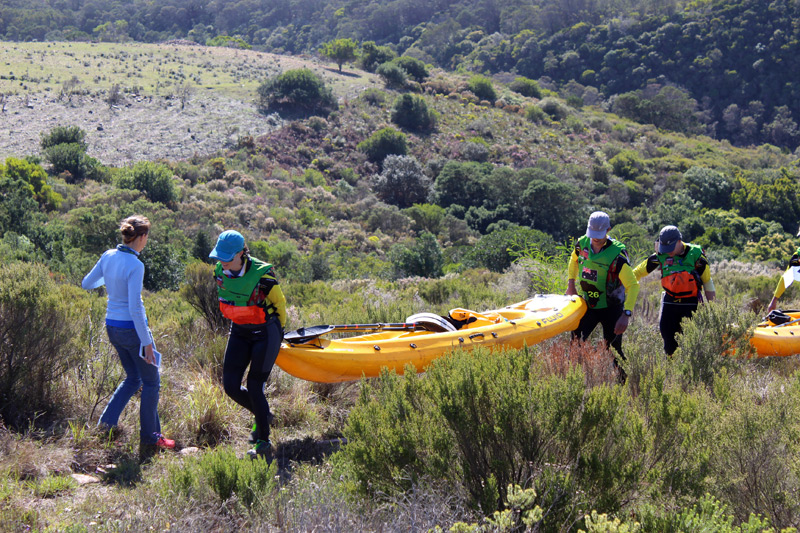 At this point this scribe’s keeping up with the race was unfortunately done. The spirit was willing but the body sent more than a few warnings so I was unable to see all I had planned to on the opening day of Expedition Africa. Unlike the competitors in this awesome event I was able to traverse the general direction on the course  in the comfort of a vehicle, challenged  by climbing a couple of farm fences and a few hills yet by midday I conceded defeat and headed for the comfort of a Car Park John draught beer back at the resort.

Not too sure if I will be covering the next couple of days of the race as they navigate to more remote areas of Kouga and the Baviaans for the old ticker protested a little too much during the first days activity so I will take medical advice to slow down and rather follow the race on my PC monitor  for a day or two while I recover so that I can join in the spectating as the leading teams get closer to the end of the race come Wednesday. Crazy to think these amazing athletes can cover 500 kilometres in three days using their feet, kayaks and bikes but apparently they will, although a few of the slower teams will take the full seven days which is still an amazing feat.

And lest we forget! Congratulations to Hadyn Holmes of Liquid Lines and Byron Lockett on winning the Kromme Descent (more on that tomorrow).  And of course let us not forget the Southern Kings defeating The Sharks on Saturday. As an avid Sharks supporter it was not a result expected nor one easy to live with but the Kings were quite simply, OUTSTANDING.

There are also a myriad of Facebook sites where you can get news and photos as the race unfolds.