Compliments were the order of the day at the Annual St Francis Bay Teams Bridge Tournament which was run from Friday 12 May to Sunday 14 May 17.

This tournament has built up a reputation for excellence and this year was no exception. From the perfect venue at the St Francis Links to the slick organisation of the committee it could not be faulted.

Such is the reputation and popularity of this tournament, twenty-six teams of four competed this year, packing the venue to capacity. Joy Faulkner of from Port Alfred commented that they fight to be included in the team to St Francis Bay as the tournament at the Links is such an excellent one. Seven teams came from Port Elizabeth alone, and others travelled from Port Alfred, Kenton-on-Sea, Cradock, Bedford, Plettenberg Bay, Knysna, George, Jeffreys Bay and even one team from Johannesburg, to compete against the local participants.

Hanne Kroyer, a competitor from George who is a “swallow” from Denmark and who plays regularly at the club there said: “You could not find a tournament of this quality in Denmark, at this price, and another thing that impressed me most was the kindness I experienced.”

Prue Gillespie from Port Elizabeth said that the tournament was amazing and the organisation excellent as was the food.

In his closing address Geoff Ellis, President of the St Francis Bridge Club, thanked Jeff Clause for outstanding food and service provided by the St Francis Links. There was loud applause from the entire room at this. The staff had pulled out all the stops to provide assistance wherever needed and the venue itself is conducive to the quiet concentration required by the game. He also expressed thanks to the ladies of the Committee who had presented the venue so perfectly, to Roger Lea who ran the computer scoring with help from Judy Beck, and to John Boonziaer for liaison with the Links on the food and beverage side.

A tournament director plays a major role at any bridge session and to run one of this size is no easy task but Eileen Ellis, performing this role for the first time, succeeded admirably. John Boonzaier, Deputy President, complimented on her patience and for coping with the hectic demands made on her services in such an excellent manner. 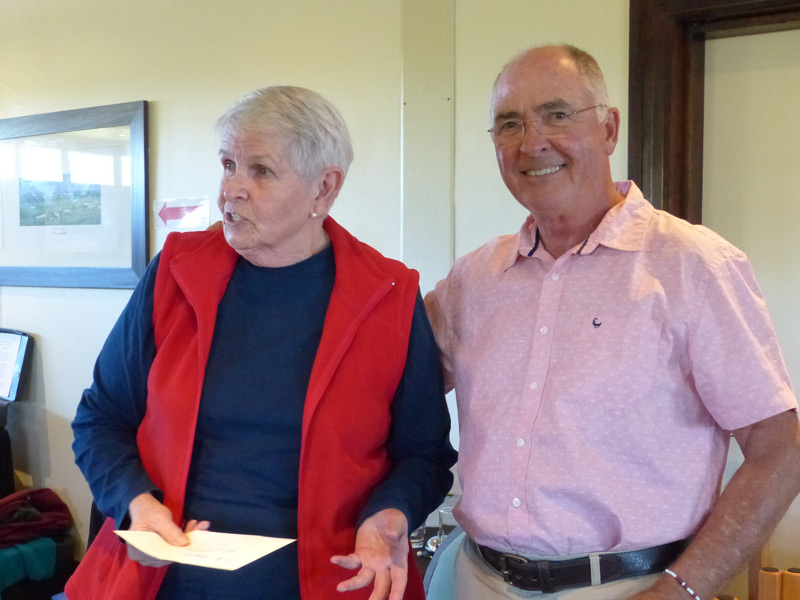 Tournament Director Eileen Ellis, in typical pose organising and making sure things go well, with John Boonzaier Vice-President of the club who thanked her for her excellent handling of the competition.