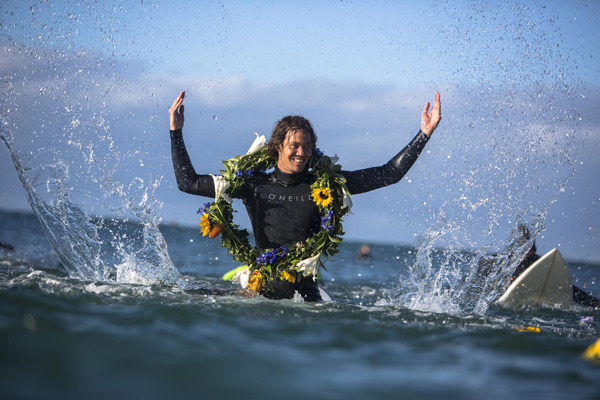 Championship Tour surfer Jordy Smith and friends joined locals and other surfers from all over the country for a Memorial Paddle Out in honour of Jack O’Neill at Lower Point yesterday morning.

For the man who pioneered the wetsuit, it was fitting that the weather had arrived in JBay, and it was a freezing, cloudless morning at Lower Point. Surfers were trussed up in their best rubber as they launched through the keyhole into the fresh southwest wind blowing up the point, for the paddle out.

Memorial Paddle Outs were staged worldwide, with Jack’s hometown Santa Cruz leading the proceedings. Over 2500 people joined the celebration there in what was the biggest memorial celebration the surfing world has seen to date. People were on surfboards, in boats in the water, and lining the cliff, as 1977 Surfing World Champion Shaun Tomson from South Africa made a speech honouring the man.

In JBay, Jordy Smith led the proceedings. “Jack O’Neill was such a visionary and a pioneer,” said Jordy. “Apart from wetsuits and all he did there, he was a forward thinker on so many different aspects of our surfing life. I wouldn’t be able to surf in Cape Town if it wasn’t for him. He opened so many doors for people to be able to enjoy the ocean and it’s something that we can be grateful for.”

Jordy had the pleasure of hanging out with the man a few years ago.

“I remember hanging out with him at his house in Santa Cruz a few years ago,” said Jordy. “After a surf he asked me what the water was like. I told him that it wasn’t too bad, not too cold and he smiled and said to me, ‘you’re welcome.’ That’s all he said. It was the craziest thing. It was so funny, and something I’ll remember forever.”

Jordy paddled out into the small surf at Lower Point with a wreath, and surfers followed him out and joined the circle. It was a fitting tribute to the man who pioneered the wetsuit and did so much more for the sport.

On Monday 10th July 2017, O’Neill would like to invite everyone to join a paddle out in celebration of Jack O’Neill’s life and adventures. From Santa Cruz to Jeffrey’s, O’Neill will honour the legacy of Jack O’Neill with numerous paddle outs worldwide on Sunday July 9th and Monday the 10th.

Most recognizable for his eye patch and his beard, Jack’s desire to surf longer drove him to create an innovative suit that allowed surfers to be the first in the icy waters of the San Francisco Bay and the last out. Playing around with materials to create a barrier between the body and the ocean, Jack’s first suits were built of unicellular foam material that he bought from a local surplus store. The invention was monumental – it made it possible for surfing to be a year-round activity in cold water areas and welcomed a new mass of people who previously didn’t surf. Those first suits led to more surfers, more fans and the eventual acceptance of surfing in popular culture.

A series of memorial paddle outs will take place across the globe to celebrate the legacy of Jack O’Neill, a man who, through sheer passion changed the face of surfing forever. Honouree paddle outs are scheduled in the United States, Canada, the UK, Netherlands, Belgium, France, South Africa, Australia and Japan.<

Jack O’Neill, surfer, ocean lover, wetsuit pioneer, sailor, balloonist, and founder of the iconic worldwide surf company O’Neill, passed away in Santa Cruz, California, of natural causes at the age of 94. The family of Jack O’Neill and the O’Neill brand would like to extend a heartfelt “Thank You” to all who have reached out with thoughts, prayers, sympathy, remembrances, stories and pictures since the passing of legendary waterman Jack O’Neill on Friday 2nd June 2017.

For further information on the Jack O’Neill paddle-out please contact:

O’Neill, the original California surf, snow and youth lifestyle brand, was founded in 1952 when a young man named Jack O’Neill took his unstoppable passion for surfing and used it to beat Mother Nature at her own game. Pioneering the world’s first neoprene wetsuit, Jack had successfully found a way to extend his surf sessions in the bone-chilling breaks of Northern California. He opened up the garage doors to his first surf shop in Santa Cruz soon after.

While many things have changed since those humble beginnings, Jack’s initial vision of producing functional and innovative boardriding products continues to lie at the core of everything the company does. O’Neill’s core values – innovation in style and technology – have seen the brand devote itself wholeheartedly to the evolution of the action sports lifestyle.  From the first ever neoprene wetsuit and surf leash, to the world’s first stitchless boardshorts and range of groundbreaking wearable electronics, O’Neill’s progressive spirit will always drive the company forward.  For more information, please visit www.oneill.com

About The JBay Winterfest