At 10h05, Wednesday, 26th October, NSRI St Francis Bay duty crew were activated by the Transnet National Ports Authority (TNPA) to investigate eye-witness reports of a whale suspected to be beaching or in difficulties off-shore of Jeffreys Bay.

We launched the Sea Rescue craft Spirit of St Francis II and on arrival on the scene confirmed that a whale carcass was floating off-shore. Save & Exit

To prevent the carcass from washing ashore TNPA have arranged a boat that will tow the whale carcass out to sea.

At 10h50, Wednesday, 26th October, NSRI Shelly Beach duty crew were activated following a request for assistance made to the Shelly Beach control from the fishing vessel Lucky Sands reporting one of her 2 motors suffering motor failure.

The skipper and one crewman remained on the casualty boat and they were able to bring her in on one motor safely without incident and no further assistance was required. 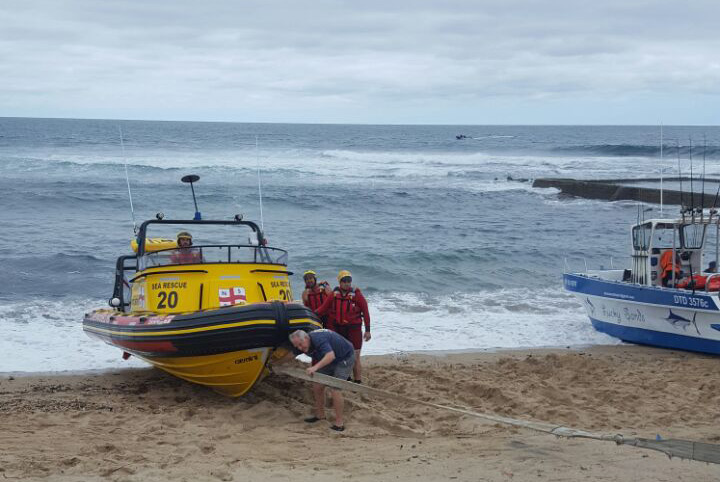 On arrival on the scene a tow-line was rigged and we towed them to the Knysna Angling Club without incident and no further assistance was required.

At 16h46, Wednesday, 26th October, NSRI Bakoven duty crew were activated by the Transnet National Ports Authority (TNPA) following eye-witness reports of a man being swept out to sea at Camps Bay Beach.

Laila Saven, of Eco Waste Group, a local who was at the beach at the time and who is involved in a Unilever sponsored program training the Ola Ice Cream vendors along the Atlantic Sea Board (they are trained in community awareness and carry basic first aid kits and are St John’s First Aid trained and received training by NSRI’s WaterWise program), contacted NSRI’s Andrew Ingram directly and this assisted by giving responding resources a regular update of the events as they unfolded.

It appears that a local adult man, aged in his 20’s, was swept out to sea by rip currents. Another local adult man, aged in his 20’s, went into the water to assist but he also got into difficulties. Laila was able to summons a body boarder who launched into the surf and using his floating body board he was able to rescue the man who originally got into difficulty. We believe that the second man made it out of the surf unassisted. Bystanders waded in to help the men out of the water.

NSRI commend the bystanders who assisted today at Camps Bay Beach. Laila and the body boarder (unidentified) and the members of the public who waded into the surf to assist.