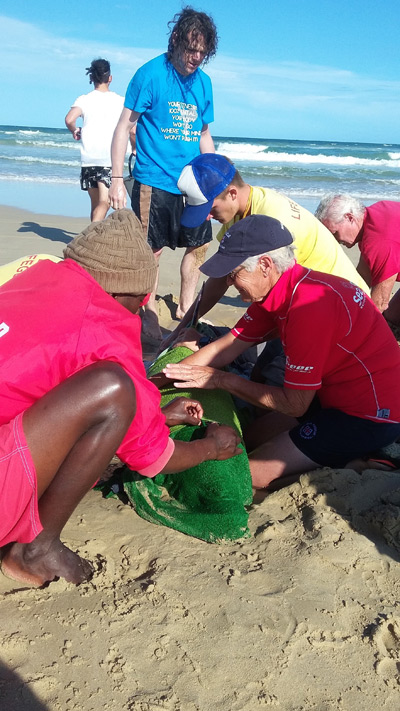 Photo by NSRI Jeffreys Bay. Show the injured dolphin being cared for at Kabaljous Beach.

A call from Paul Makupula, from Jeffreys Bay Lifeguards reporting a baby dolphin stranded at Main Beach Jeffreys Bay was received by NSRI Station commander, Ernie Schmidt early on Saturday morning. Schmidt and his wife, Elaine who is also an NSRI crew member, responded to the scene. Elaine had recently completed the Marine Animal Stranding Network course presented by Bay World in Port Elizabeth in conjunction with The Department of Environmental Affairs – Oceans and Coasts.

“Unfortunately, when we arrived on the scene it was found that the dolphin had been put back into the sea several times but it kept beaching. By the time we arrived it did not beach again” commented Schmidt. “It appears to have been a juvenile Bottlenose dolphin and we stayed in the area for some 90 minutes in case there was another beaching” continued Schmidt who then briefed the lifeguards not to try to put the dolphins back in the water, but to rather call the NSRI to activate the Stranding Network who deal with strandings in the appropriate manner.

Later in the day, a little before 4pm, a call from Tim Baard at Kabeljous Beach reported another, much larger dolphin stranded, and that the dolphin had fairly severe wounds on its side and back behind the dorsal fin.

Schmidt continues.  “Myself and my wife Elaine arrived on the scene and organised the lifeguards and some members of the public to assist us in dealingl with the animal ensuring that it suffered as little stress as possible while decisions were being made about the fate of the severely wounded animal. NSRI’s Michael van den Bergh was summoned to bring our NSRI Rescue Mobile to the beach.  The dolphin was an adult, male, Striped Dolphin, reportedly a species very rarely seen in the area”.

Dr Greg Hoffmeyer, of Bayworld, was contacted by Malcolm Logan who assists him in the Jeffreys Bay area and Dr Hoffmeyer immediately organised a veterinary surgeon from the local Oribi Animal Hospital, Dr. Kathy Bezuidenhout, to examine the animal.  He also contacted Mike Meyer of the Department of Environmental Affairs – Oceans and Coasts to get approval and to advise on action in cooperation with the vet.

After examining the dolphin the it decided that the wounds were too severe for it to live if it were put back into the sea and arrangement were were made to take the animal to the Animal Hospital. The dolphin was too big to fit onto the NSRI Rescue Mobile  and a member of the public came to the NSRI’s assistance with a pickup truck.  Mr Pierre Hertzog, from Bloemfontein, and his two sons Hans and Dirk agreed to help (The Hertzog family happen to also be involved with the Oceanographic Research Institute (ORI) for whom they at times assist with the tagging of sharks).

The dolphin was loaded into a Stokes basket stretcher and transported off the beach to the pickup truck and then transported with a team of carers on the pick-up truck to the Animal Hospital where sadly, after all attempts to save the dolphin were exhausted, the dolphin was humanely euthanised by the vet.

Everyone who assisted is commended in this incident.

NSRI urge the public to call NSRI in cases of Marine Animal strandings so that the Marine Animal Stranding Network can be activated.