Bobbies on Bikes for St Francis

Receiving six bicycles from Community Policing Forum’s Nigel Aitken and SFPO Association Chairman Wayne Furphy, Lt General Ntshinga in her keynote address commented on how the Bobbies on Bicycles was a wonderful opportunity for the public to be able to interact with the local police. With more visible policing offered by the ‘Bobbies on Bikes’ as well as the improved access to areas not always accessible in police vehicles, would go a long way to reducing crime in the St Francis.

Following the event at the Community Hall, SAPS hosted a lunch for dignitaries and media at St Francis Links and to celebrate the event, six  ‘Bobbies on Bikes’, as some local residents may have witnessed, rode their new bikes with a ride from the Community Hall to the Links. 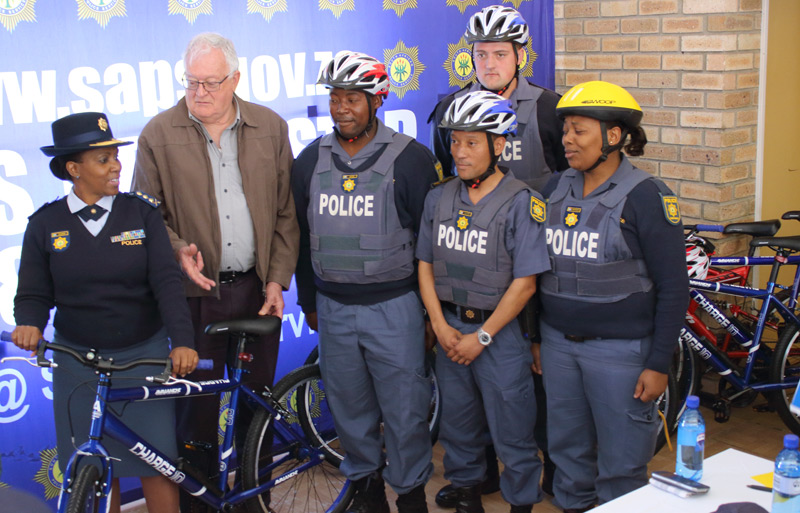 Footnote:
Lt General Ntshinga joined the SA Police Service in 1985 and her experience as a specialized detective spans over 22 years. She has vast experience in the investigation of sexual offences and organized crime, which resulted in her being appointed as the Provincial Head, DPCI in the Northern Cape in 2010. During the first DPCI prestige awards, the Northern Cape received an award of best project investigation which was recognized internationally. Ntshinga successfully led various operations and projects including Project CARNARD, a cross border operation between Namibia and South Africa, focusing on theft of motor vehicles from Japan thorough Durban harbour  en-route to Namibia, Project DE LITE, dealing with precious stones that were illegally exported from SA to Switzerland and India and Project DARLING, a sting operation carried out by a multi-disciplinary project team whereby 21 senior businessmen were arrested in different provinces on charges of contravening the Diamond Act. The court granted ten preservation orders in terms of the Prevention of Organized Crime Act, effectively freezing property in the sum of about R50 million. Diamonds worth R60 million were recovered during the raids.