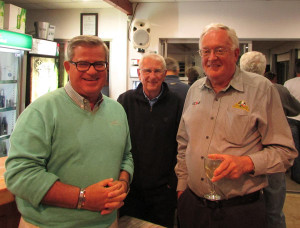 The well-attended St Francis Bay Residents Association meeting held at St Francis Bay Golf Club last Thursday evening was opened by Chairman, Nigel Aitken thanking those present for the attendance and the good turnout. He proceeded calling for ‘young blood’ to take an interest the association’s affairs and take over the baton. Much if not most of what needs to be done to improve matters in St Francis Bay is the hands of the residents as there seems little chance of support from the municipality. Council had illustrated their lack of understanding of the importance of St Francis Bay and seemed simply not to care about the serious problems facing the town.

Introducing Ward Councillor Ben Rheeder, Aitken thanked the councillor who he said has worked tirelessly for the town in the most trying and difficult circumstances.

Taking the microphone Cllr Rheeder emphasized the need for a strong Residents Association and confirmed that thankfully St Francis Bay had not only the strongest association in Kouga but at a recent meeting in Bisho a senior provincial government official commended the St Francis Bay Residents Association on being possibly the most organized and active residents associations in the Eastern Cape. Reiterating Aitken’s call for new blood on the committee, Cllr Rheeder said if St Francis was to see change it was up to the residents to work together and put in the effort and hard work, particularly with the 2016 municipal elections on the horizon.

Explaining the frustrations of working within the Kouga council with a minority of just a single vote, decisions seldom are in favour of St Francis and this was the reason why St Francis and Jeffreys Bay are receiving the “bad end of the stick”. The ongoing he beach saga is an example of this. A company appointed to assess the beach submitted a report three years ago but the report sat with council for two years before he, Cllr Rheeder, was able to persuade council to accept the report. It went through the first phase of the standing committee and was then held back as “some of the councillors couldn’t understand the report and wanted the consultants to come and explain the report to them”. To date it has progressed no further.

Thanking Cllr Rheeder for his comments Aitken continued in similar vein stating that certain councillors were blatantly obstructive of anything concerning St Francis. An example of this was a recent request for the association to receive the money from boat licensing so as to be able to properly administer and police the river. The matter has twice been struck off the agenda by opposing councilors without reason. Aitken continued that they, the council, employed totally unsuitable and equally incapable staff to look after matters relating to the river.

Raising the issue on the state of the roads and infrastructure, Aitken confirmed this was escalated to Bisho late last year and resulted in a productive

meeting in February this year. Also of interest was that two weeks ago the council was given two weeks’ notice to reply to correspondence sent to them over the past four years that they have notyet had the courtesy of even acknowledging . The association has kept meticulous record of all correspondence to council and awaits the council’s response, that was due on Friday 4th September.
In closing Aitken confirmed that after two years as chairman he would not be standing as chairman next year but he would certainly assist the incoming chairman and committee wherever possible to ensure continuity. He again stressed the need for some of the younger residence to step and serve on the SFBRA as it was essential for new people come on board, particularly with the upcoming municipal elections next year.
Opening the meeting to the floor for suggestions and …..

Read the following article regarding the Beach and Potholes