Geoff Ellis, President of the bridge club, explained how Dinks Liebenberg, the founder of the SFB Bridge Club, had started some 20 years ago, an annual fund raising bridge competition in aid of the NSRI in appreciation for all they do in the area. This bridge tournament has been continued each year since then, has grown in popularity, and is attended by bridge players from far afield in both the Eastern and Western Cape.

All bridge club members donate prizes so everyone who plays in the tournament goes home with a prize, either from winning or from a lucky draw. In addition, Carol Boonzaier organised a raffle which raised R855. The lucky winner was her husband and committee member, John Boonzaier, who promptly donated his prize to the NSRI. Jeff Clause of the St Francis Links generously offered 18 holes for a four-ball, including golf carts, which was auctioned and raised R1700.

Geoff went on to describe how the bridge club committee this year, decided to ascertain what equipment was needed rather than make a straight forward monetary donation. This idea was well received and the NSRI came up with the idea of waterproof binoculars. Bushnell came to the party here donated a pair of their waterproof binoculars. Commercial Marine gave a special price on another pair so these, and R5000, were presented to Sara and Stuart.

Sara in thanking the Bridge Club said she was blown away by the generosity of the club and assured those present that the equipment would be put to good use, both in the regular weekly training and during operations. Stuart, who is a Coxswain, explained how difficult it was to look for a speck in the ocean when on rescue missions, and how valuable this equipment would be.

Station 21 is one of the busiest stations on the coast and a week ago their boat had come back from having a mini refit and during that first week back they had already carried out two operations, one of them for a serious heart attack patient on a chokka boat. They had to do a 50 nautical mile round trip to near Huisklip to collect the patient, and treat him en route back to the base where he was collected by ambulance. The NSRI is run completely by volunteers and funded by donations from the public.

Sara used this opportunity to mention that the station is desperately in need of volunteers to work on shore, doing radio work, liaison with ambulance services etc. Please contact the local NSRI Station if you can help – Sara on 082 896 5579 or the NSRI number 082 990 5969. 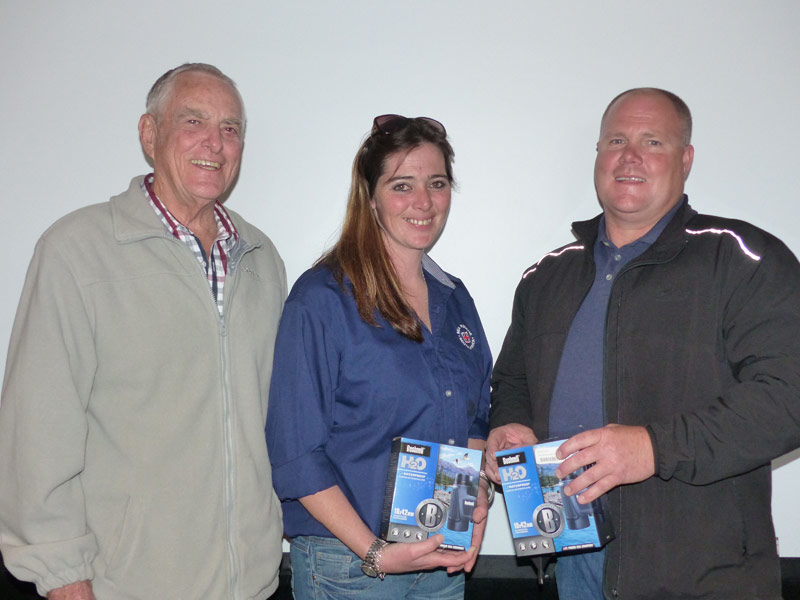