Bridge players came from far and wide to participate in the popular Charity Bridge Day at the St Francis Links on 20th September 2016. Dinks Liebenberg started fund raising for the National Sea Rescue Institute, Station 21, about 20 years ago by organising an annual bridge tournament and the tradition has continued growing in strength and enthusiasm.

Players came from Knysna, Plettenberg Bay, Jeffreys Bay, Port Elizabeth, and even as far afield as Pretoria and enjoyed a really successful, well-run tournament. There were twenty-two tables (four players per table), two of which were set aside for novice players, providing them with the opportunity to experience tournament conditions, which can be rather daunting at first.

The St Francis Links came to the party once again and pulled out all stops to provide the perfect venue and a delicious lunch. Jeff Clause, CEO of the Links, offered an extremely generous prize of 18 holes for a four-ball, including golf carts (worth about R2000). This was auctioned by John Boonzaier and secured by a thrilled Di Klette from Plettenberg Bay.

The club was honoured to have Heidi Atkinson participating. She is the Chief Tournament Director of South Africa, President of the Southern Cape Bridge Union, and is on the board of the South African Bridge Federation. She had this to say of the tournament: “I am impressed by the dedication of the St Francis Bay Committee who provided bridge for both newcomers and experienced players. They work hard and do it with love, always going the extra mile.”

Tournament Directors for the day were well qualified locals Eileen Ellis and Judith O’Hara who were able to participate as well as performing their duties with consummate skill. This enabled Heidi Atkinson and Patrick Verner (TD from Pretoria) to play without officiating, much to their delight.

An additional fund-raising raffle produced R855. The winner was committee member John Boonzaier who immediately donated it to the NSRI.

Geoff Ellis, President of the Bridge Club, expressed his appreciation to the members of the bridge club and the business community of St Francis who so generously gave prizes for the day. Everyone went home with something and a good time was had by all who attended.

The visitors were impressed by the exemplary organisation and Patrick Verner, Tournament Director from Pretoria, commented on the lovely, relaxed and pleasant atmosphere and the outstanding competence of the St Francis Bay committee.

The tournament was played in two sections: 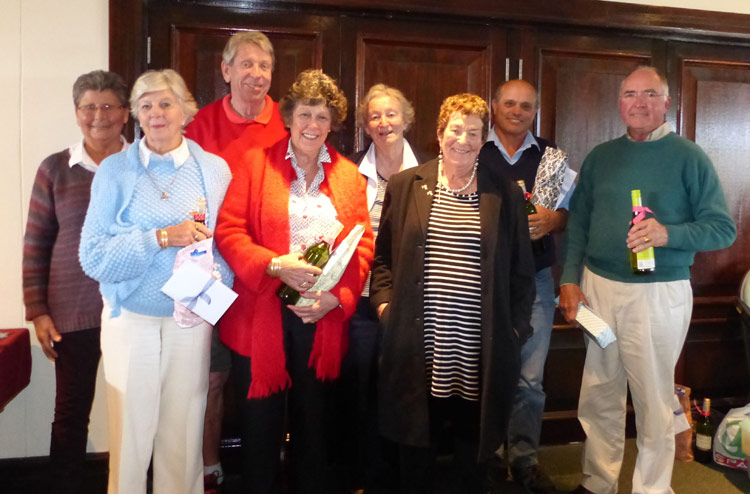