The Sand River Bridge is on track to carry traffic over December holiday season but construction will continue well into 2018.

St Francis Today was invited along with Nigel Aitken of SF Property Owners Association to visit the new Sand river bridge construction for a full update on progress. Well we are pleased to be able report back with good news.

Barring an unprecedented flood, an earthquake or strike by a falling meteorite it appears that the bridge will be partially open in time for the December / January holiday influx. Good news for the expected holiday makers and St Francis at large.

Within the next few weeks the construction team expects to start pouring the concrete slab that will span the support pillars already constructed to form the roadway over the bridge. A mammoth undertaking. Whilst the contractor indicated that this would offer two lanes to the expected holiday traffic the bridge itself, would be far from complete as there will still be work to be done before commissioning of the bridge late in the first quarter, possibly in the second quarter of 2018.

After donning all the required safety gear we joined the contractor on the perimeter of site rather being allowed access to the heart of the construction for obvious safety reasons. Having the contractor explain what would have still have to be done once the bridge is opened to vehicle traffic certainly gave us a better understanding as to what has been achieved thus far and what still needs to be done. Because of the ‘temporary’ causeway it has been impossible to extend the bridge foundation to its full required width. This can only be done once the main section of the bridge is open to traffic and the temporary causeway, presently the only thoroughfare in and out of St Francis has been excavated.  Once the causeway has been removed work will commence on extending the foundation, increasing the width of the support pillars as well as the width of the bridge.  The main water pipeline from the Churchill dam will also be incorporated into the structure of the bridge.

The photograph below illustrates just how close to the causeway is to the bridge with sandbags seemingly all that is preventing the causeway falling into the bridge excavation area and why the causeway will need to be excavated before the final foundation can be completed.

As the foundation is extended so too will the bridge so as to incorporate pedestrian walkways on either side, guard rails et al which will be missing when the bridge is initially opened to vehicle traffic. Actually standing above the construction site and having the contractor explain the progress and further development it becomes evident the need for the tons of reinforcing steel that protrudes from various parts of the bridge construction.

In the interim residents are reminded to drive with care when navigating the bridge area and in the coming months expect a few delays as the construction reaches the critical stage of laying the roadway slab. Calming devises will no doubt remain in place even once the bridge is opened for it will still be a construction site and as such present its own dangers, particularly for those who choose to ignore speed limits. 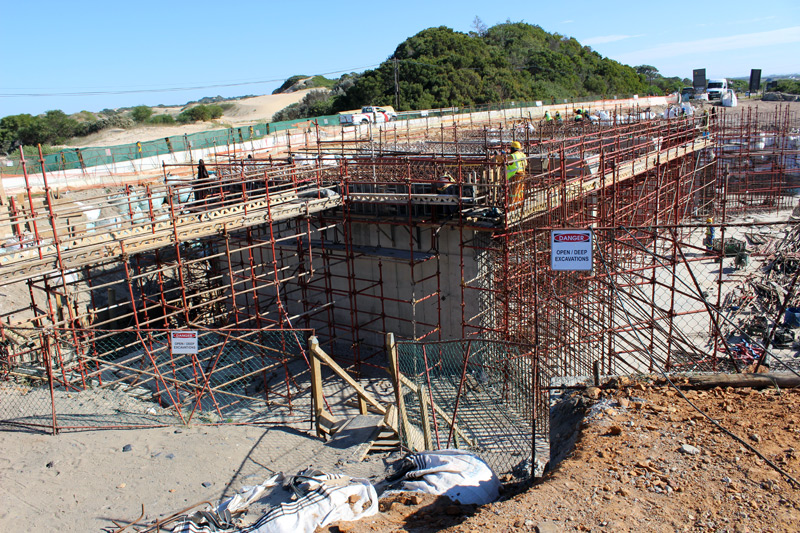