There is, however, a limit to my patience. Whilst it is the Contractors business as to how long he takes to construct the works, he should realise that he makes no friends by dragging the construction period to excessive periods as he is doing. After a tediously long construction period, traffic was diverted from the detour over a portion of the final bridge width. Everyone said ‘YAY’. Jubilation was, however, short lived.

The approaches to the bridge were prepared for the heavy traffic flow with a conventional base course which was then painted black with a thin coat of bitumen emulsion. It was patently obvious from the outset that this would be totally inadequate during a period of rain, let alone during dry weather. Limited rain has fallen since then, but the riding surface has deteriorated during the dry period and the recent rains to the extent that it is best classified as atrocious.

The final completion of this Contract appears to be some months away, based on the painfully slow progress made to date. Why do we have to have this situation imposed on us by the powers that be? I do not appreciate the middle finger being shown to me by a Contractor, Consulting Engineer and the Province who have no direct interest in the future well being of our home town. We deserve better!!!”

The rain has certainly helped churn up the ground onthe bridge approaches and it not for the traffic calming one would do serious damage to one’s tires were you not forced to drive so slowly. Good news is that construction will halt for the builders holiday’s in mid Deember so thinhs may improve marginally Garth 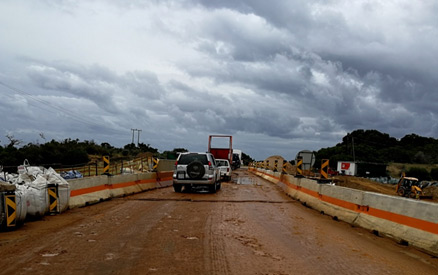