Running the gauntlet in a St Francis 50 #2

If you haven’t yet read Part One Click Here

Continuing on from Part One ….. I suppose this marked the beginning of an amazing and memorable voyage. But I had no idea then, (doing some delayed paperwork), that what lay ahead would be far more serious than I would ever have imagined..

The “blue on blue” carries a unique energy.  Day in and day out you progress on your relatively tiny vessel across the vastness of the ocean. Somehow the sky above you feels massive. There is no cell phone signal. Your daily diary becomes appointment free. What you could have or should have done before you left is irrelevant. It’s you, the boat, the crew and the elements. The days of the week are registered in the logbook, but Saturday means as little or as much as Monday. In our case we travelled in style.

All cabins were en-suite. We had a huge chest freezer, two fridges, four plate gas stove, full size oven, microwave, TV, DVD, surround sound (including exterior speakers) etc etc. I divided the day into 3 four hour watches and the night into 4 three hour watches. This works well as the watches roll evenly between sunrise/sunset and the inevitable “dog watch”. The person on the 08h00 – 12h00 prepared lunch as well as did the dishes etc. Similarly the person on the 12h00 -16h00 did dinner. Breakfast was always a help yourself affair. 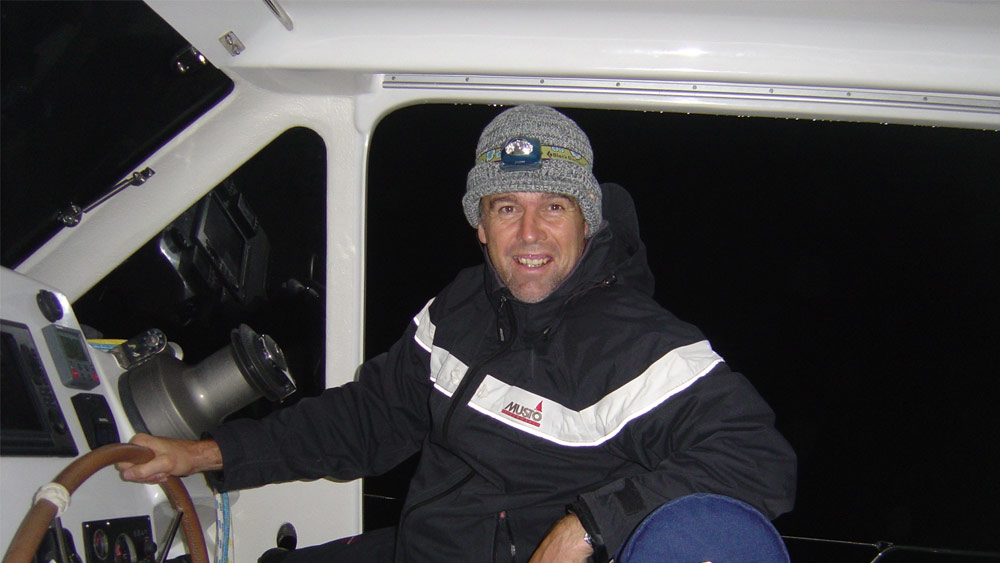 Stephen at the helm on the Dog Watch

Aboard “Penelope” everybody (Skipper incl) made a real effort to prepare a meal when it was their turn. Food is always a highlight of the day at sea so; when it’s not your turn (which is 3 meals out of 4) you can kick back and enjoy the other person’s effort. We ate extremely well, baking bread every other day. We caught fish too, but not as many as we would have liked. (Maybe 6 in total) We landed only one good size Dorado but it the hook pulled out of its mouth as we were getting it up the transom steps. Instead of the fish being gutted, I was ! Doradao is my absolute favourite fish to eat.

We sailed practically all the way across the equator, which was amazing. I had received permission from Duncan Lethbridge (Owner of St Francis Marine) via satellite phone that we could use the new gennaker. We did, but took it down every night without fail! We dressed Deon and Kat in their foul weather gear on the day we crossed the equator. They sang to Neptune while wrapped in the remnants of “Patch”. As they sweltered, we toasted Mother Ocean with a bottle of Pongraz. Looking up at the gennaker I pinched myself at how smooth the trip had been so far.

For the Atlantic leg, we’re being weather routed via satellite phone by Duncan himself, and my brother Pete. Pete is an avid surfer and I couldn’t have wished for anybody better. Duncan too, was always spot on. As we approached the bulge of Brazil, the hurricane forecasts started coming in. It’s early September. At this time of year the hurricanes develop west of the Cape Verde Islands and come screaming across the Atlantic towards the West Indies. Generally they bend north from there, but as we all know, many don’t……….. Often slamming into the Caribbean Islands, the Bahamas or South Florida. “Igor” was the first one that we got wind of. Way north of us it wouldn’t pose any direct problems but it was scary. As Pete put it…………”Igor looks like a hung-over Viking who just caught someone in bed with his wife. If that thing gets anywhere near you, best you find some underground parking!” We all had a nervous giggle but the reality was that we were entering “the zone”.

With Igor to the north of us, I decided to tuck in behind it and head straight for St Lucia. After 32 days at sea, the Pitons familiar silhouette greeted us at dawn. Land holds an unusual smell after being at sea for a month. I breathed in its earthy sweetness with satisfaction. It had been a long haul but leg one was over.

Ideally I would have only liked to stay for 2 days but swells from Igor were smashing into the Bahamas and I knew it would be a very uncomfortable ride. As it turned out, we stayed for 4, long enough to enjoy some wonderful St Lucian hospitality and experience the famous Gros Ilet street party. The boat was in great shape and after taking on some fresh produce and diesel we set off towards the Bahamas.

Conditions were favourable and we made good time with the screecher, logging several 200nm plus days. Nighttime was always a little unsettled though with squalls forming quickly. Under clouds we were getting 35+ knots of wind. Lots of lightning as well but luckily never too close. The water temperature was 35 degrees centigrade……. ideal hurricane conditions.

After 6 days we arrived at St Francis Resort on Stocking Island where we were welcomed by George Godfrey and his family. Leg two was over. The few days there were chilled enjoying crystal clear waters and evening games of poker with the locals.

We were constantly keeping an eye on the weather as there was lots of activity south of Cuba. Tropical storm “Nicole” was developing and starting to head north. Our time was running short with winds forecast to go north off Cape Hatteras in a few days. Risking stiff breeze on the nose against the Gulf Stream was not really an option. If we didn’t go now, we’d probably miss the Boat Show. So we left in a hurry trying to duck in underneath the advancing Nicole.