The iconic STIX pub in Cape St Francis closed its door for the last time just three weeks ago and almost before the last puddle of spilt beer had dried, workmen stepped in and started work on transforming what was, as one regular commented, “a dive but we loved it”. The result has seen the pub totally transformed from a rather run down joint to a bright new music bar and kitchen called Rock Lily.

A large Rock Lily logo raised some 15-foot off the ground and the white, very white frontage, tells you, you have arrived at Cape St Francis’ newest ‘jol’.  The veranda has been partially enclosed with white boarding offering guests sitting out on the veranda a little privacy from passing traffic. As you climb the steps onto the veranda the signs say “YOU’RE ABOUT TO ROCK” and then “JUST AS YOU ARE”. Entering the pub is a revelation. Although the actual layout has remained virtually intact it simply doesn’t resemble the old STIX in any way. Beautifully restored wooden floors, a red wine and turquoise colour scheme, a new bar counter top, and somehow they have created space that somehow wasn’t there before.

The best way to see how much it has changed though is to go and have a look for yourself.  Rock Lily opens its doors for the first time at 11:00 am on Friday morning (18th) but the real action starts in the evening when a DJ will entertain what is expected to be a big crowd to music of the “27 Club” (see footnote). This will be followed up on Saturday night with regular St Francis visitor Wendy Oldfield and Lionel Bastos entertaining  from 8:30pm. A newly installed braai facility has been installed on the veranda and on Sunday they will be offering a family braai which they hope to make a regular Sunday event.

Owner Mike Kimmings and his business partner Louanne Mostert, ex-Marketing and Fundraising Manager of SANCCOB, say Rock Lily is wholly devoted to good music and good times, “a music bar with a kitchen”! On the subject of food, the pizza bar that proved so popular over the Christmas season has been moved off the veranda into the kitchen so you will still be able to order your favourite pizza as well a selection of burger type fare. 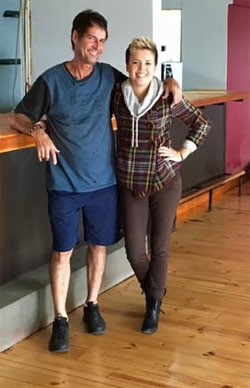 And the name Rock Lily? Louanne explains “Mike and I have a stunning father-daughter-like relationship, with a neutral ground where we both share the outlook of learning, loving and living life. He is my rock, that allows me to flourish – like a lily.”

Methinks it also has much to do with a very successful facility in Sydney, Australia known as Rock Lily which offers patrons “a live music venue stocked to the ceiling with the world’s most sought-after tequilas” much of what Rock Lily, Cape St Francis hopes to serve up for locals and visitors alike

27 Club
The 27 Club refers to an unusual occurrence where some of the world’s best known music icons passed away aged 27. Among these, Brian Jones, the founder and the original leader of the Rolling Stones who drowned in his swimming pool aged 27 in 1969. Jimi Hendrix aged 27 died in 1970 from barbiturate related asphyxia and less than a month later Janis Joplin, one of the major attractions at the famous Woodstock festival and well-remembered for her hit “Me and Bobby McGee” passed away from a heroin overdose as did Jim Morrison, lead singer of The Doors in July 1971 also aged 27.  This unusually common occurrence did give rise to casual comment but when Kurt Cobain aged 27, took his own life in 1994 with a self-inflicted gunshot wound the 27 Club found its place in rock lore.. Seventeen years on Amy Winehouse joined this illustrious group and so those at Rock Lily on Friday night are in for a treat of some great music stretching across some six decades from some of the world’s greatest rock legends.