Protest on R330 under control

The protest yesterday on the R330 before Humansdorp yesterday was about the lack of RDP Housing and the relocation of the informal settlement around the waste-water plant.  Senior Kouga municipal leaders met with protestors to hear their grievances so as to diffuse the situation explaining that the Eastern Cape Department of Human Settlements is the responsible authority and not the DA led municipality. Whilst the municipality could not make any promises they do communicate with Department of Human Settlements wherever they could to assist. Mayor Elza van Lingen confirmed that the municipality “had already addressed most of the grievances that were raised in a similar protest at KwaNomzamo last September”.

The Mayor confirmed the municipality is doing what it can to uplift the area but housing is unfortunately not within their scope of services they can control. Following last year’s protects gravel roads have been graded and 23 water taps installed in informal settlement areas.  The bucket system still in place in some parts of KwaNomzamo is marked for removal in next year’s budget. The severe drought Kouga is experiencing has seen the municipality having to allocate funds to water disaster management by implementing drought relief measures with boreholes where drilling in Oyster Bay has been successful with drilling continuing in other parts of Kouga.

In her SOMA address, Mayor van Lingen appealed to councillors to explain to their communities the dire water situation and explain to them how the efforts in water security would have an effect on some services, including road maintenance. The Mayor confirmed yesterday that “a stronger educational drive is necessary in this regard”.

Law enforcement had the area of the protest under control late yesterday and patrolled the area overnight with no further instances reported at the time of publication of SFT this morning. 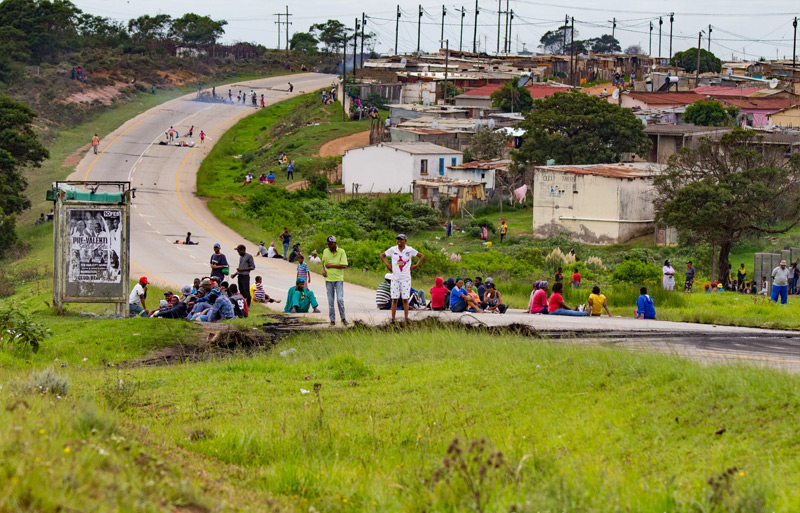 Maybe we as residents should consider some of the above before complaining about potholes or lack of some service delivery. We don’t have the bucket system and we all have a proper housing with running water and electricity. The municipality is turning things around but the drought has severely stretched an already stretched budget. So if anyone in StF is thinking of taking to the streets in protest of service delivery, rather stay home.