R20 Million Worth Of Cocaine Washes Up At Supertubes, Jeffrey’s Bay

JBay Cops made a pretty big score on Wednesday.

Yesterday morning, two large waterproof duffel bags packed thick with white bricks washed ashore at Supertubes, JBay. It was small and onshore early, with few people around. Passers-by and dog-walkers alerted the police as to the find. The duffel bags were firmly tied to a 20l oil drum, the packets were waterproof, and it might have washed off a ship in the deep.

Or, another theory was that the drum might have broken free from an anchor at a collection point beyond the backline and washed in overnight.

“Cocaine estimated to be worth about R20m was found on the beach at Jeffreys Bay on Wednesday. Hawks spokesperson Lt Col Philani Nkwalase said the discovery of the consignment washed ashore was made by people walking their dogs on the beach.

“Upon examination, they called the police about what seemed to be a drug consignment,” said Nkwalase.

Our (somewhat naïve) calculations are that the figure is actually quite a conservative estimate, especially of street value. 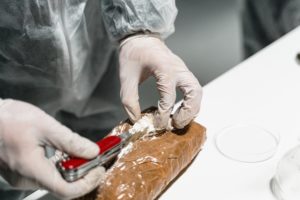 But to make things a little bit more terrifying, each brick had a pic of Miguel Ángel Félix Gallardo on it.

Miguel Ángel Félix Gallardo, commonly referred to by his aliases El Jefe de Jefes (“The Boss of Bosses”) and El Padrino (“The Godfather”), is a convicted Mexican drug lord. He was one of the main dudes behind the Guadalajara Cartel in the ’70s. He was involved in murder and other such heinous crimes. He’s an old man now but ran his racket from inside prison walls for 30 years or so.

A recent interview with a wheel-chaired El Padrino

So quite a serious situation, if there are people in JBay expecting a pick-up. There is also much talk that there might be a few more duffel bags floating around. So it might be a white Christmas in the quiet little town of JBay. Having said that, the local SAPS have been working working around the clock – often without sleep – to solve this one. The ones that aren’t retiring, that is. 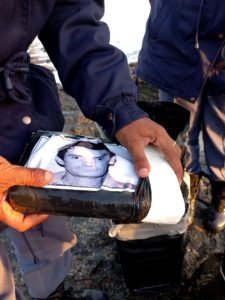 JBay is well known for drugs and drug busts. There have been quite a few busts over the last few years.

A few here and here.

Right now the west is up, and the swell is coming. There are currently hundreds of eyes on the ocean at Supertubes.