The power of CCTV technology as a crime fighter

There certainly is a lot of merit in deploying CCTV cameras for 24-hour security surveillance for these tiny technology marvels do a lot more than simply record perpetrators of crime going about their illicit business.

At a meeting held at St Francis Links last evening, John Hammond, on behalf of the St Francis Policing Forum, outlined the benefits of installing CCTV cameras in and around St Francis. Hammond’s vision is to install a pilot project covering certain identified hotspots within the greater St Francis and then slowly building on this nucleus to extend it to the entire region south of the Kromme and even Oyster Bay.

Expanding on the benefits, Hammond suggested several including the obvious from being a deterrent to criminals, to reducing anti-social behaviour (watch out you late night louts who go on early morning wrecking tours), identifying suspicious behaviour and generating proof of crimes by way of video footage thus helping police secure convictions more efficiently. Other benefits are numerous but would include early detection of fires, traffic control (beware those who choose not to stop at stop streets), accidents, beggar control, parking in disabled parking, the list seems endless.

It is pretty much common knowledge that the courts are not coping with locking up criminals. Far too many perpetrators are let out on bail whilst overworked understaffed police put together necessary dockets for prosecution allowing them, the criminals, to walk free to continue their illegal activities. Cameras don’t lie and many a case would be more speedily concluded with video proof as perpetrators would have little choice but to ‘cop’ a plea of guilty.

After laying out all the benefits along with some basic costings, Hammond handed over to a supplier of CCTV equipment who has supplied most of the equipment for Port Elizabeth’s CCTV infrastructure of some 1800 cameras. A very interesting and enlightening talk followed on the power and versatility of modern CCTV technology. Does technology have no bounds? 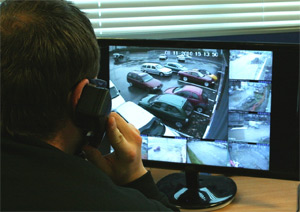 So advanced are the cameras these days that even the lack of street lighting, a reality in parts of St Francis, particularly Cape St Francis, that they can ‘see’ upwards of  100 metres in pitch darkness using infrared technology. Using video footage captured on St Francis Drive yesterday during the day, the video demonstration showed just how good the picture resolution and colour of these cameras is to say nothing of the incredible zoom capability which demonstrated how the cameras can zoom in to objects hundreds of metres away with perfect clarity. Most enlightening however was how the system can be programmed so that cameras react to certain anomalies making it easier for those in the control room to stay on top of things. As stated, a very interesting presentation.

St Francis is quite unique in many respects to most towns in South Africa as it has only one road in and out. If nowhere else and as a start, a camera with Number Plate Recognition (NPR) software should be installed sooner rather than later near the temporary bridge for it is common knowledge that whilst crimes are certainly committed by locals, criminals also come from further afield to steal and pillage. And most, if not all, booty has to be transported out of the area for resale. Identifying and tracking vehicles suspected of being involved in crime would be a good start and certainly a deterrent. Other cameras in a start-up project could be installed in the business district of St Francis and along Tarragona Road in Sea Vista.

Obviously significant costs are involved in setting up a starter system so possibly businesses in the area could start the ball rolling by contributing to getting a pilot scheme off the ground. Once a working system is up and running there is no reason why it cannot and should not be expanded into residential areas. Crime is only going to increase unless steps are taken to deter criminals from using St Francis as their shopping mall.