Some will recall the Rotary Recycling scheme run from a tiny wooden cabin set on God’s Acre in Sea Vista. Sadly the facility had to be closed after vandals literally walked off with the entire cabi, donated by an international Rotary club to the cause, as well as the contents ‘goodies’ that were used to reward the kids for their efforts of collecting recyclable litter from the streets of Sea Vista.  Because of the theft Rotary had little option but to close the facility depriving the kids of Sea Vista who were rewarded with points for what they collected , using these points to ‘buy goodies’ from the Rotary shop housed in the cabin.

It was indeed a sad day to see the end of a valuable method of reducing non-biodegradable litter, in particular plastic considering our closeness to the sea, but also as a valuable educational process teaching kids to be aware of their environment.

But not all was lost for some out of the box thinking by Rotary St Francis saw them come up with another idea, smaller but but just a valuable as an anti-litter educational initiative.

So in conjunction with Kromme-Enviro Trust, Rotary St Francis recently introduced an exciting initiative to create both an awareness of plastic pollution among the young generation and at the same time encourage them to reduce the non-biodegradable litter on the streets of Sea Vista.

Part of this initiative which we can only hope will not only be sustained but also encouraged and introduced throughout the Kouga region, is to make plastic bottle ECO-BRICKS by filling the 2-litre bottles with non-biodegradable litter, sweet wrappers, chip packets, plastic wrap, aluminium foil, anything that in non-biodegradable and that will fit, by hook or by crook, into the bottle

Chatting with Brian Codling of Rotary St Francis at a presentation at Talhado Children’s Haven on Friday morning he explained how in a joint effort between Rotary and the Kromme-Enviro Trust, they introduced the concept of filling 2-litre plastic bottles with non-biodegradable matter that litters the streets of Sea Vista to the kids at Talhado Children’s Haven. As incentive they offered brand new bicycle’s to the first four children able to properly fill ten bottles. The rest is history for at the Friday (4th October) presentation at the school, three bicycles were awarded to Luzain Jamoor, Basil Malgas and Wayden Adams. A fourth cycle, won by Sergio Smith was not presented as Sergio was unable to attend the event.

It is no mean task to pack just one of these bottles let alone ten for as each layer of sweet wrappers, plastic wrap, chip packets, or whatever other non-biodegradable waste is added, the added layer has to be stamped down and compressed to create a firm final product  suitable for its intended purpose as an eco-;brick. That these little kids, themselves not much bigger than the bottles, so diligently stuck to a task most adults would probably declare a no contest after three or four bottles, will surely teach them the importance of perseverance and who knows, create a group of anti-pollution, anti-plastic ambassadors who will transform Sea Vista into a model township.

“Creating these eco-bricks really is to make the children aware of their environment and teach them to clean up their surrounds and at the same time reduce the amount of plastic that litters the township.   The bricks will eventually be used to build benches, chairs, pot holders retaining walls around gardens, their uses are many and varied and best of all help clean up the environment” said Codling.

Possibly 5-litre water bottles that seem to proliferate in garbage bins, especially over holiday periods, can be introduced to the initiative for the one failing of the two litre bottle is that plastic bottle tops won’t fit but they will fit into the top of a 5-litre water bottle.

Well done Rotary St Francis, Kromme-Enviro Trust and most especially the kids of Talhado Children’s Haven for adopting this initiative so enthusiastically and helping to clean up our environment. Keep up the great work.

Scroll down to view photo gallery of the presentation event

Warren giving the kids a lesson on plastic pollution 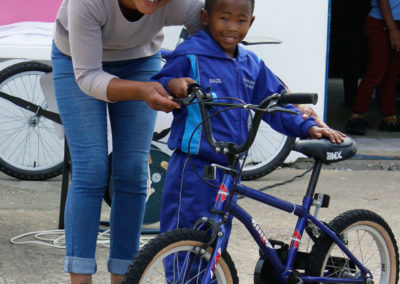 Wayden gets his prize from Tom as Warren, Santa and Brian look on

Two proud lads with their bikes

All the winners with teachers, Kromme-Enviro Trust & Rotary St Francis

The three winners Luzain, Basil and Wayden with Cathryn & Warren

Basil and and Wayden surveying their bikes

Children lining up to enjoy a party

Rotary St Francis President handing over Popcorn, candyfloss and a cool drink to an excited pupil