Personality of the month – December 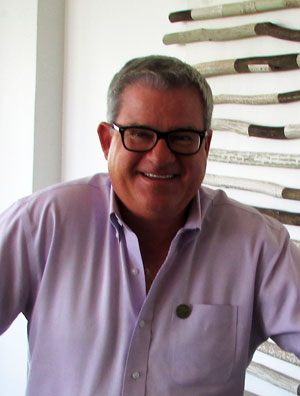 Our personality for December is in the strictest terms, an “uitlander” but one cannot honestly refer to him as such for he has totally embraced his new country and in his words, “I am an American by birth and a South African by choice”. Need we even mention his name?

Well in case some have not yet had the opportunity of meeting him, our personality this month is the affable, approachable, amicable and entertaining, CEO of St Francis Links, Jeff Clause. As we know CEO stands for Chief Executive Officer but Jeff prefers the title ‘Chief Entertainment Officer’ for whilst he runs an incredibly efficient and first rate golf estate he believes his main task is to entertain and ensure every visitor to St Francis Links enjoys their time on the estate and returns again and again.

Jeff arrived on our shores some 25 years ago when the newly developed Fancourt, South Africa’s first resort golf course and estate opened. Head hunted from his position as head professional at Hills of Lakeway Golf Club in Austin, Texas,  Jeff recalls his decision to take the Fancourt position was met with “how can you leave the greatest place in America and go there”? But come to South Africa he did “best decision I ever made”.

Growing up in a small town in Iowa with just 4000 people, Jeff related how at the tender age of 16 he would “pump gas”, braving the freezing wither and snow to make money and because no one else would do it. It was here he started off as a club professional, teacher, shopkeeper and tournament organizer. At the age of 23 he sought bigger challenges and moved to Houston, Texas  where he spent the next few years serving his apprenticeship, the majority of this time at Houston Country Club.

Jeff realized his early dream job when he moved to Hills of Lakeway Country Club in Austin, Texas where he was to become head professional and pursue his love for tournament organizing. Hosting most, if not all of the major Texas tournaments including The Texas State Championship and both the South and North Texas PGA, Jeff was doing what he liked and did best. And then came the call of Africa and so at the age of 35 Jeff found himself in the then small Garden Route town of George.

And it was at Fancourt where his life again took another step for the better for here he met his lovely wife Liezl who worked at Fancourt. Four years on and Jeff and Leizl married and so “Team Clause” was formed.

Jeff was again prey of head hunters, this time to take over and develop what was to be the first Jack Nicklaus golf course in South Africa, Simola in Knysna. Unfortunately things didn’t work out well for Simola for as some may recall it was dogged with bad luck and was twice washed away. Thus Jeff moved to Pezula, also in Knysna, where he and Liezl worked tirelessly for the next eight years.

Jeff was aware of the Jack Nicklaus development in St Francis and needed no second invite to come and have a peek. And so the story begins.

“By the time I walked on the 4th Tee with the dunes in the background on a grey August  day – Woof .. the  hair on the back of my neck stood up, And when I went and met Liezl after being at the course she could see a change in me. We started Fancourt from nothing, we started Pezula from nothing so why not a new challenge”.

Moving to a small “condo” in the Port, Jeff and Liezl set about employing and training staff for the soon to open St Francis Links. And on the 1st December Jeff, Liezl and newly appointed and trained staff finally gained access to the clubhouse but with a nigh on impossible task of getting everything set up and ship shape for the opening ten days on. And so Team Clause sprang into action hanging curtains and drapes, pictures, setting out tables and chairs even the Point of Sale had to be set up and running in these ten short days but long nights.

As Jeff so succinctly puts it, “it’s all about the team“ after a short hesitation “and Liezl, I actually work for her”.

And on D-Day with all in place Jeff proudly had the pleasure of introducing Jack Nicklaus to the gathered guests.

Moving on from the hectic days of the opening of St Francis Links we moved on to Jeff and the St Francis community. Having come from a small town Jeff is very aware of the scenario of the private country club often considered as untouchable. Thus Jeff has from the outset of his time at the Links, endeavoured to embrace the community of St Francis. Many have benefitted from this open arms attitude ensuring all are welcome. Be it hosting bridge tournament fund raising gala dinners, weddings or association meetings, the Park Run or the SPCA dog walking fundraisers, Jeff, through his staff, ensure that all that is possible will be done to ensure a successful event.

And of course let us not forget about Jeff’s first love, well after Liezl of course, organizing golf tournaments. The very first golf tournament ever played at the Links, simply known as “The Annual” was played in that very first December in 2006 shortly after the club opened. The 10th edition of “The Annual” now sponsored by Pam Golding Properties, St Francis Bay is to take place on the 7th and 8th of Jannuary 2016.

Asked what the key to running a successful Golf Estate Jeff’s answer was a simple “keeping people happy and having a great team to make it happen”.

Community means a lot to Jeff whether it is the community on the estate to create a great lifestyle for people who have invested at the Links or for the St Francis community or even the Eastern Cape for that matter. Visitors are always.

Asked whether he still finds time to play a round of golf?  “Yeah I still kick it around.  I’m a little hard on myself  but I have a great future behind me in golf”

Plans for the club?  – “I still want a national championship, to see more homes built and would like to see the whole community prosper “.