It is appropriate that our photo of the week has the NSRI Spirit of St Francis Rescue boat featured alongside the Greenpeace ship Rainbow Warrior for our local lads and ladies from NSRI did us proud this weekend both in preventing a disaster as reported below but also on a personal note at the Kromme Descent.

At 19h30, Friday, 4th May, NSRI St Francis Bay duty crew were alerted following reports of the Tug Boat AHT Carrier reporting that while towing the MT Order (towing to Maputo) the towing rope had separated and rope had fouled the tug boats one motor tethering her to the casualty boat and she was unable to recover the tow rope to re-attach a towline to the casualty vessel and reporting that effectively both the tug boat and the casualty vessel were drifting shorewards in the currents but at that stage still at least 15 nautical miles off-shore.

The Transnet National Ports Authority (TNPA), NSRI St Francis Bay, NSRI Jeffreys Bay and NSRI Port Elizabeth were placed on alert and while no lives were in any immediate danger with the 2 vessels tethered to each other the sea rescue stations remained on high alert to respond if an emergency developed.

The tugboat investigated all possibilities to detach herself from the casualty vessel and to re-attach a towline.

At 23h50, with unconfirmed information suggesting that the casualty vessel and the tugboat to be anywhere between 5 to 10 nautical miles off-shore and NSRI unable to gather accurate information on the exact amount of crew on the tugboat NSRI assisted to gather information from the ship’s agents.

It was reported that salvage divers had been activated from Cape Town but it would take quite some time to reach the scene.

It was then confirmed that there were 14 crew onboard the tugboat AHT Carrier and no crew onboard MT Order and at 05h00 NSRI learnt that they were now at least close to 4 nautical miles off-shore and that the SA Amandla salvage vessel had been activated but they were only due to arrive on the scene at 14h00.

On arrival on the scene we found both vessels approximately 5 nautical miles off-shore and in the current drift, they were approximately about 2 hours from running aground.

All crew onboard the tug were safe but they were helpless without a tender boat to recover their towline from the water and with rope fouled around one motor leaving the MT Order at risk of running aground.

Rope fouled around the motor of AHT Carrier had been loosened but one motor was still not operational.

On investigation we found a cable lying in the water off the stern of the casualty vessel.

The thick and very heavy rope that we found was hauled with great difficulty but successfully by our NSRI rescue crews onto the sea rescue craft (as much of the thick rope as was possible was recovered) and NSRI then rigged a patent line, using NSRI normal towing rope, and we were able to feed that patent line that we had rigged to the crew of the tug boat and the tug boat recovered their towline and stern to stern, on one motor, the tow ropes integrity was sound and the tug boat was able to hold the casualty ship by using her one operational motor from drifting and stopping their drift towards shore at 08h18.

NSRI sea rescue craft remained on the scene and only returned to re-fuel.

The tugboat, with her one motor operational and tow-line rigged stern to stern, they were able to gently head further out to sea.

NSRI met the SA Amandla on her arrival at around 13h00 and we stood by on the scene while the SA Amandla took over the tow of the casualty vessel from AHT Carrier.

Once the tow was safely taken up by SA Amandla NSRI returned to base and later in the afternoon we have been requested to take the salvage divers out to the AHT Carrier.

The SA Amandla has now towed the casualty ship further out to sea and no further NSRI assistance has been requested.

During the operation, Telkom Maritime Radio Services assisted with communications and Disaster Risk Management had also been placed on alert and SAMSA (South African Maritime Safety Authority) are assisting with coordinating this operation.

NSRI St Francis Bay, NSRI Jeffreys Bay and all involved in this operation are commended for averting a disaster at sea today. 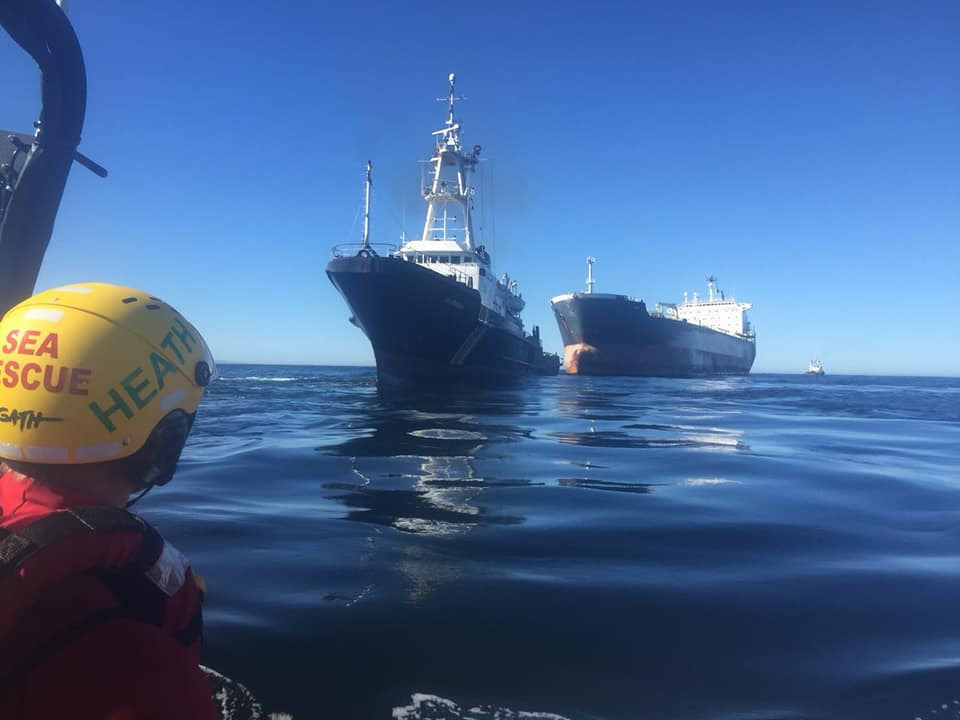