JULY started on a bright note for residents of Humansdorp when three new high mast LED lights were switched-on in the area on Monday, July 2.

The state-of-the-art LED lights were erected at Lower Golf Course in KwaNomzamo, Goede Street in Arcadia and Donkerhoek in Gill Marcus at a cost of more than R1 million.

Kouga Executive Mayor, Horatio Hendricks, said the municipality had prioritised the installation of high mast lights in these communities to improve the safety and security of residents.

“Experience has shown that high mast lights are one of the most effective means of lighting areas where vandalism and crime are rife,” said Hendricks. “It is not that easy for vandals and criminals to break these lights, as they tend to do with traditional streetlights.”

According to Hendricks, the high mast lights also increase visibility at night and provides a sense of safety, while enhancing the quality of life in areas that were shrouded in darkness before as it allows for increased night-time activities in a safe environment.

“An additional advantage of LED lights is that they are brighter than conventional bulbs, but actually use less energy and last longer – which brings with it cost benefits without compromising on quality,” said Hendricks.

“Reducing energy consumption is also good for the environment and in line with our efforts to keep Kouga green.”

Hendricks said the project is a joint intervention between the municipality and various local crime prevention organisations launched earlier this year to improve community safety and combat crime.

“This project is a good example of the municipality’s commitment to ensure the safety of residents,” he said. 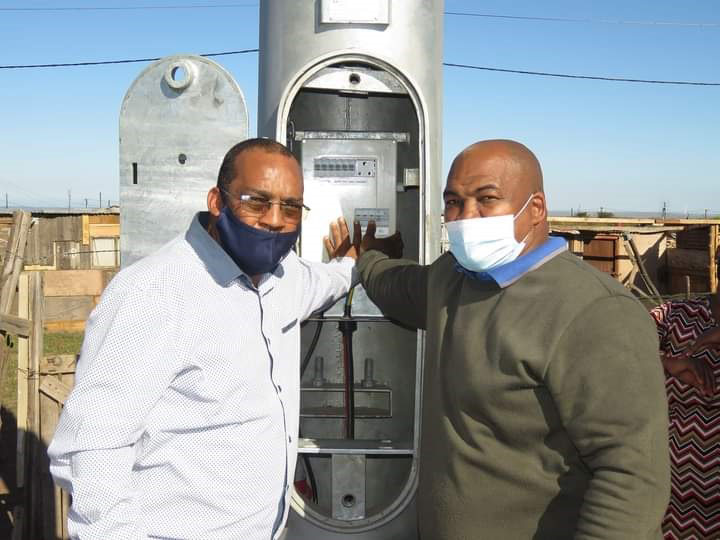 Residents of Donkerhoek in Gill Marcus, Humansdorp rejoiced on Monday this week when Kouga Executive Mayor, Horatio Hendricks (left), and Councillor Jacques Alexander (right), switched on a new high-mast light in the area. The light was one of three new high masts that were put up across Humansdorp at a cost of more than R1 million.