Municipality to Clamp Down on Illegal Electricity 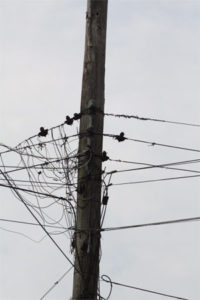 KOUGA Municipality, in conjunction with the local South African Police Service, is set to clamp down on illegal electricity connections in the region – no matter what it takes.

Thus, Kouga Infrastructure and Engineering Portfolio Councillor, Willem Gertenbach, has called on all residents to support the initiative, which aims to safeguard communities against the serious threats posed by illegal electricity.

According to Gertenbach, illegal electricity connections are most prevalent in informal settlements across the region – especially Ocean View in Jeffreys Bay, Sea Vista in St Francis Bay and KwaNomzamo in Humansdorp.

“The loss of income due to illegal connections is estimated at about R280 million per year,” he said.

“Illegal wiring is generally not installed properly and often criss-crosses streets where children play, and people walk. These innocent people could easily be shocked and killed by this wiring.

“It, furthermore, presents a serious fire risk – especially in informal areas where structures tend to be more flammable and built closely together.”

“The municipality regularly cut and remove illegal wiring, but perpetrators often simply replace the wiring and continue with their illegal activities once the municipal team had left.

“Workers who cut illegal wiring are also often threatened with violence by those guilty of stealing electricity.”

According to Gertenbach, residents who supply and use electricity illegally, put their entire communities and their own families at risk.

“It is a situation that cannot be tolerated, and we call on communities to report such activity and to support the municipality in its efforts to clamp down on it,” he said.

“Residents who supply electricity illegally are issued with stiff fines the first two times they are caught. Smaller circuit breakers are also installed to their homes to limit the amount of electricity they can access.

“If offenders are caught a third time, their electricity supply is disconnected permanently.”