More than 1 000 streetlights and floodlights across the region have been retrofitted with LED lights. 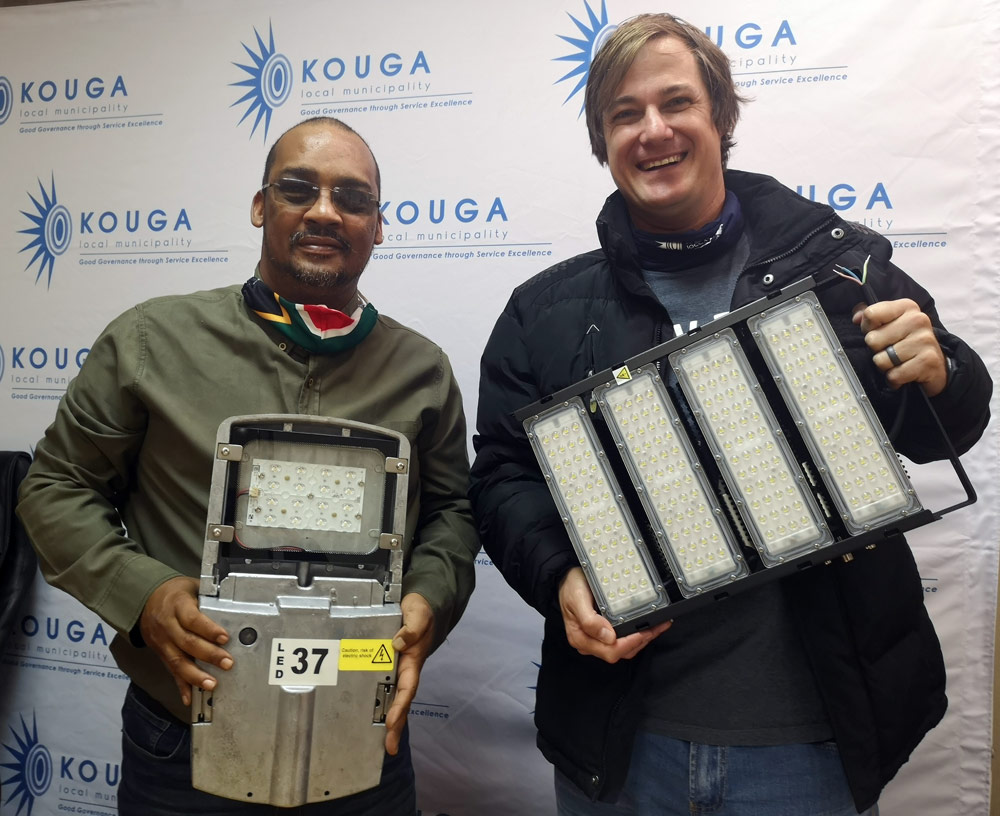 Kouga Mayor Horatio Hendricks and Speaker Hattingh Bornman, with the LED lights that are being rolled out across the region.

“The advantage of LED lights is that they are brighter than conventional bulbs but actually use less energy and last longer, which brings with it cost benefits,” said Kouga Executive Mayor Horatio Hendricks.

He said the programme was rolled out in the 2019/20 financial year after the municipality’s Electrical Services section secured R4-million from the national Department of Energy for Energy Efficiency Demand Side Management (EEDSM).

“Municipalities are able to apply for this funding to roll out projects such as streetlight replacements and to increase the energy efficiency of municipal buildings and assets such as pump stations,” he explained.

“It, therefore, presented us with an excellent opportunity to decrease the region’s electricity usage, especially during peak periods when Eskom charges a higher tariff, without compromising on quality.

“Reducing energy consumption is also good for the environment and in line with our efforts to keep Kouga green.”

“The funding also made provision for job creation, which enabled us to employ six youths from the area for a period of three months.”

He said the project had been complemented with an awareness drive to encourage residents to minimise their electricity usage between the peak hours of 5pm and 7pm and 6am and 9am.

“I would like to congratulate our Electrical Services team for successfully implementing the project despite the challenges brought about by the COVID-19 pandemic and lockdown.

“Going forward, the LED lights will save the municipality money while staff will also have more time to attend to other projects aimed at improving service delivery to communities.”

He said the municipality would be applying for more funding as part its commitment towards service excellence and cutting down on carbon emissions to help save the planet by supporting green energy.

He said the aim was to roll out the programme to towns within Kouga fed by Eskom, so as to reduce the streetlight bill from Eskom in those areas as well.

This week’s jigsaw – entering the ocean