Monday night is usually a quiet, stay at home night for many but  for some, especially for those who work over weekends a chance to get out and about. From a personal situation where waking early to compile St Francis Today means early to bed Sunday to Thursday nights make Monday a no-no but an old pal I worked with back in 70’s suggested we should go and try the R95 offering at Dune Ridge. An invitation to visit Dune Ridge is not something one turns down for not only is it one of the most beautiful havens in St Francis, but it also means good food, be it a platter of sandwiches, a selection of cakes or indeed a meal.

Each Monday Sarah-Jane puts together a menu with a choice of two starters, two entrees and two desserts. Last night the starters were a pumpkin and cumin soup or a sourdough bread with creamy peri-peri chicken livers. Entrees were both to die for; Lamb Shank or a Spinach & Feta stuffed Chicken topped with a Garlic Neoplitana Sauce and dessert, either Chocolate Brownies or Malva pudding with a Amarula Custard

Having arrived earlier than rest of the party I sat on the patio taking in the night air and best of all, the wonderful aromas drifting through the house from the kitchen. Seeing the menu and recalling those wonderful aromas of earlier, my decision was simple – Lamb Shank. Not being a big eater I gave the starters a miss.  My decision to forego a starter was well rewarded for the lamb served on a bed of creamy mashed potatoes, cauliflower, broccoli and sprouts was  not only generous but absolutely scrumptious ‘fall-off-the-bone’ delicious.

Then the ‘piece de la resistance’! Malva pudding. Having been desperately trying to lose weight I have steered away from sugar over the past eight weeks but simply could not deny myself. Certainly the highlight of the meal and I would return just to have another. And judging by how the other guests who chose the Malva almost licked their plates clean they were unlike Mallett and Williams, but rather in total agreement. More than delicious!

Dune Ridge is offering these Monday dinners at just R95 although the starter is at additional cost should you choose one and St Francis Today will endeavour to get Sarah to send us the menu in advance so you can put together  bunch of pals and spend an evening at Dune Ridge. Sarah has also introduced a ‘Burger & Crazy Shakes’ night  on Wednesday 23rd (tomorrow) night. If their burgers are anywhere as good as that Lamb Shank it is a night not to be missed. 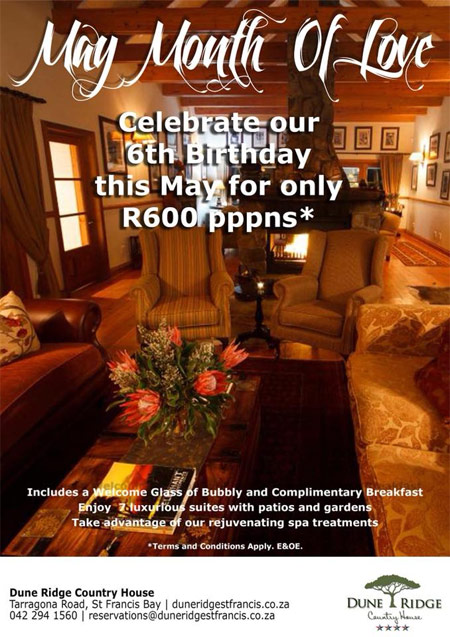