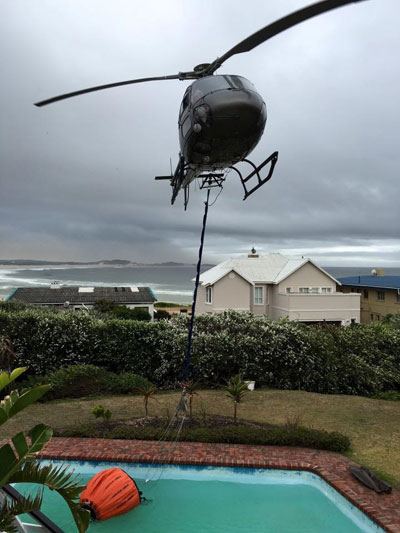 Descending the hill from Sea Vista down towards the traffic circle opposite St Francis Links offers a panoramic view over St Francis Bay, the sea and the mountains. Yesterday, from this elevated position, the area over the canals and Kromme was shrouded in mist. A gentle breeze was blowing,and the mist, particularly over the canals was gently billowing not unlike smoke. Now the brain knows it is only the fog lifting but the mind starts playing tricks and starts wondering if it could just possibly be smoke? Of course not! But still those nagging question remain, what if the smoke is being camouflaged by the mist?

It is astonishing how one becomes so much more aware after an experience such as the recent fires that devastated the area. At this time of year the fires that ravage the Western Cape are regular press and television features. We read and watch these reports from afar but not until we are directly affected do we really start to pay attention to the threat of fire. Now every whiff of smoke becomes a concern, call it paranoia, possibly, but better that we are aware than not.

And fires definitely were in the news over the past weekend starting first with news from Jeffreys Bay where local Councillor Brendon Williams whilst driving in Ocean View Drive noticed a huge plume of smoke coming from nearby Pellisrus. Realising the fire must have been close to the houses in the area he drove directly to the source of the smoke to find a fire in an overgrown plot fanned by an easterly wind, burning fiercely and spreading in the direction of a wooden shack. Realising it would engulf the shack within minutes, Williams quickly organised the owner of the shack and her neighbours into fetching buckets of water in an attempt to douse the fire. Williams and his helpers managed to contain the fire until the Jeffreys Bay fire department arrived and extinguished the blaze.

Then on Saturday morning in Cape Town, helicopters were dispatched to stop a fire raging in the reeds between the N2 and Baden Powell Drive from spreading to the Cape Town Film Studios causing the N2 to be closed. And firefighters were on standby again over the weekend as the blaze that started the previous Saturday had started raging again in the mountainous area between Wolseley and Worcester.

One common denominator seems to run through most of the fires and that is they are fuelled by overgrown vegetation. It is thus heartening to see how many homeowners in both St Francis Bay and Cape St Francis have already cleared the bush around their homes or are in the process of clearing it. Truckloads of bush are being transported to the tip daily so one hopes there are certain precautions at the tip should this mountain of cuttings inadvertently catch alight.

Unfortunately many homeowners don’t actually live in the area and one hopes action is being taken to ensure if they do not clear the bush around their holiday homes, someone does, be it the respective residents associations or the municipality. There are still substantial areas that were not burnt, specifically between the Air Park and Sea Vista and east of the Sand River bridge towards the canals and surely these remain a threat.

Here is what some readers had to say

“I think St Francis Bay is a disaster waiting to happen, fire-wise. Look at the dense stands of alien vegetation along the R330 all the way from the Sand River causeway to Tarragona Rd. The landowners have not allowed Working for Water onto their properties to clear this highly flammable vegetation. Imagine a fire starting on the roadside and spreading eastwards through the Marina area.”
(Richard Cowling)

“What has happened to the awarding of Tenders called for by the Kouga Municipality some time ago. The tenders were for the clearing of alien vegetation from plots not being maintained by the owners. The Municipality has the right to have the plots cleared of the alien vegetation, at the owners cost, if the owners do not respond to the request by the Municipality. My recollection of the Tender Notice was that the work was to be awarded to those that would need to be resident in the greater area, in that way employing those that would very likely be currently unemployed. It would seem that it was a another good idea on the part of the Municipality, but the administration of awarding the tender, issuing the notices to owners to clear their plots and then handing over the work for clearing is just so overwhelming that nothing is likely to get done. But be sure there is likely to be a note in the 2015/2016 Kouga Municipal report that this was put into place.
What is required is that our Ward Councillor look into this matter and issue a public statement.”
(Emlyn Horne)

“I would like to see the empty stands maintained. Once upon a time anyone not building on their stands had to keep them maintained. The stand behind my house has not been touched for over 15 years to my knowledge. Not only has it been a hidey hole for undesirables who have broken into our homes but it’s full of massive Port Jacksons which are a potential fire hazzard. All the empty stands around my area are totally overgrown and neglected. Can’t we bring back the rules on maintenance ???”
(Paulene Hardy)

“I hope that after this fire the municipality make roads that can be used by the fire brigade to access areas where there is a lot of vegetation that can burn. The reserve is one such place that is dense with “fuel for a fire”. If the fire fighters have to bash out a road through the vegetation it follows that the fire has longer to burn and cause havoc. It takes longer then to get the fire under control at the risk of lives and properties. They should do so now while they already have various basis where all was burnt for the foundation of the access roads system Just a thought!

Streets off St Francis Drive on route to the port and beyond accommodate large thickets of rooikrans. Diaz Drive, Cayenne, Coriander Crescents are possible tinder boxes and a disaster waiting to happen, because vacant stands are not maintained by their owners. It is very worrying indeed.”
(Jean Fynn)

“If land owners do not comply with legislation (National Veld and Forest Fire Act No. 101 of 1998), they should be prosecuted. As easy as that!!!”

NOTE Some comments have been edited