Ready to swm (note OB on table to numb the pain)

Coinciding with the shortest days (longest nights) of the year we also experienced what were certainly the coldest days of the year thus far. With temperatures dropping into single digits and the wind chill factor further lowering the temperature, most of us sought refuge indoors around fires and heaters warmly wrapped and sipping either hot chocolate or red wine.

But there were a group of ’22 crazies’ who decided to test their fortitude by ignoring the freezing temperatures and icy waters of the St Francis Bay Canals for the St Francis Open Water swimmers, Winter Solstice mid-winter swim. Sensibly most donned wetsuits, well 20 of them did whilst two young swimmers (Abrielle and Taya) decided that their speedos would suffice in keeping the cold at bay (oh to be young).

It is reported that all those participating completed the one kilometer course required to receive a Mid-Winter Madness certificate presented by Kouga Print although two swimmers, Haydn Holmes and Amica de Jager decided an extra one kilometer lap might warm them up. There were also reports that a few of the oldies cheated by consuming glasses of Old Brown before the swim. Whether this was to warm them up or numb the senses is uncertain but after the swim Richard Arderne (Pam Golding Properties) provided gluhwein to those who required assistance in thawing out.

If you are a little crazy and would like more information or want to join this brave, even if a little crazy group, visit the St Francis Open Water swimming Facebook page. 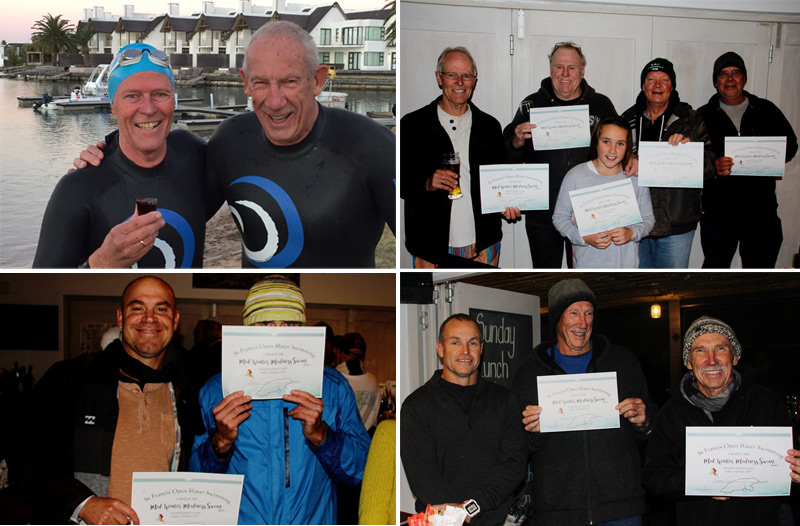 Some of those who competed along with the certificates presented by Kouga Print.