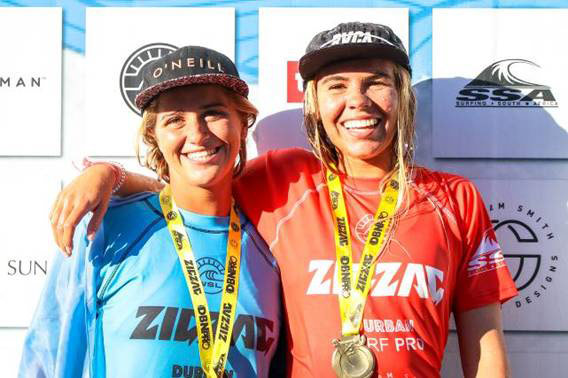 The women’s final was an all international encounter with McDougall, who has won half-a-dozen events in South Africa over the past two years and spends considerable time staying in Jeffreys Bay with the McGillivray family, overcoming the challenge of Josefina Ane (Argentina), who has just returned from a month long training trip in Indonesia after winning the women’s title in the third event on the WSL Africa QS in Port Alfred in April

The pair were evenly matched in the 25 minute final but the Hawaiian found the better right breaking waves while Ane, a goofy-foot who surfs with her right foot in front, chose to ride the left breaking waves in the middle of the beach that provided less opportunity to score highly.

“I feel great and I’m super happy to win this two years in a row,” said McDougall. “Hopefully next year I can come back and win it for a third year.”

The junior final was a see saw event with Woolf paddling out late and having to play catch up as her opponents had already posted scores. But the exciting goofy-footed talent from Jeffreys Bay stayed patient and only surfed four waves, taking the lead with rides of 5.25 and 6.50 (both out of 10) for a heat total of 11.75 that her rivals could not match.

McDougall rode 12 waves with the best two netting her 10.75 while the fast improving Zoe Steyn (East London) featured in yet another final and finished just ahead of surprise finalist Ceara Knight (Cape Town), who was competing in her first WSL Africa event of the year.

“The international girls coming in is making it really exciting,” said Woolf on the podium. . “Everybody is pushing each other and surfing is on a whole new level. My goal is definitely to get into finals in both divisions next time, but I am just taking it one heat at a time and seeing where I go.”

Earlier in the day the QS1,000 men’s event saw the top seeds enter the fray in the Round of 32 and set up a classic finals day on Sunday with David van Zyl (Glenashley), Dylan Light foot (Jeffreys Bay), Jordy Maree (Hout Bay) and Shane Sykes (Salt Rock) all posting heat wins.

Organisers will meet at North Beach at 7.00 am local time on Sunday to make a call on when to get the contest underway. The men’s and junior men’s winners will be crowned at North Beach on Sunday afternoon

Live scoring, results, photos and video footage will be available on www.WorldSurfLeague.com  and on the WSL App, with highlights on the WSL QS Facebook, Twitter and Instagram accounts.