Executive Mayor Elza van Lingen keeping us in the loop 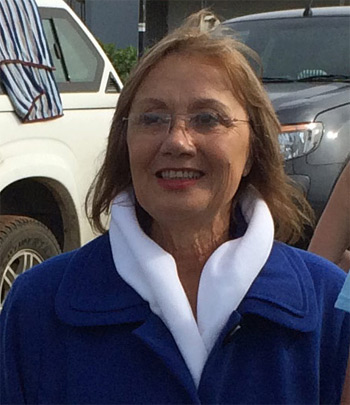 The feedback address by our Kouga Executive Mayor Elza van Lingen last Thursday had a fair sized attendance but one really would like to see a larger audience of younger bodies at these meetings. Ward 12 is made up of St Francis Bay, Cape St Francis and Paradise Beach and surely must represent several thousand residents so an audience of around 100 bodies is just a little disappointing. No doubt there will be many who bemoan the progress being made by the Mayor and her council but make not the slightest effort to find out what is really happening preferring to criticise rather what isn’t happening.

Kicking off the meeting the Mayor did a little soft sell on the new service app that the Kouga municipality has introduced. Kouga is only the second municipality, after Cape Town,  under DA control to have this app and it certainly sounds an efficient way of not only reporting problems in the boundaries of the municipality but more importantly following up and seeing whether there is progress on one’s report. If you have not already downloaded the app you can do so for either Android and IOS at download.linkapp.co.za/#dl,

Next on the agenda and almost to be expected in spite of the recent good news was Thyspunt.  It seems Eskom haven’t totally given up hope on Thyspunt but in van Lingen’s opinion it will not be happening in the near future although the Minister of Environment Affairs could still overturn Duynesfontein for Thyspunt, especially if you know who decides it will be so. Should that happen there can be no doubt Thyspunt Alliance will be in the forefront of the battle once more. Rumours that Kouga wwould receive a cash injection of some R4 billion were also apparently without substance but rather  a wish list.

On the matter of finance, whist the situation is still dire after inheriting an all but bankrupt municipality from the ANC. Van Lingen stressed how they are now able to operate finance with a month in reserve, not although not ideal, dertainly an improvement on a year ago.

But to more serious matters which sadly some are still not taking seriously. Kouga along with much of the Eastern Cape is still facing severe water shortage and as we are supplied with water by the Nelson Mandela Bay we are totally in their hands. Apart from the fact that NMB water is unlikely to assist us with funding as the water shortage becomes more critical, the Mayor and her committee are redirecting funds from other services, wherever possible, so as to develop boreholes should the water crisis become that critical. These monies are most likely going to come from less essential services such as roads so if we have a few more potholes over the holiday period we can explain our visitors it was either potholes or water. Maybe a poster campaign will help our influx of visitors appreciate just how serious our situation is. Oyster Bay apparently is already past critical and they are in the process of drilling for water. The situation in the Gamtoos Valley appears equally catastrophic and the season hasn’t yet started.

From recent press reports Kouga has declared war on waste and the Mayor expanded on this with the intention of council to introduce Wheelie Bins to Ward 12. Certainly they are used throughout the world and certainly keep garge safe from marauding dogs and far easier and efficient with the right vehicles doing the garbage pickups. The problem will come when the public hears they will have to buy their own wheelie rather than being supplied one free of charge by council.

Some positive feedback on the APP

WE ALL HAVE TO DO OUR BIT – SAVE WATER!

More on the Mayor’s feedback tomorrow,  the SRA, camera security, the riots  and more.