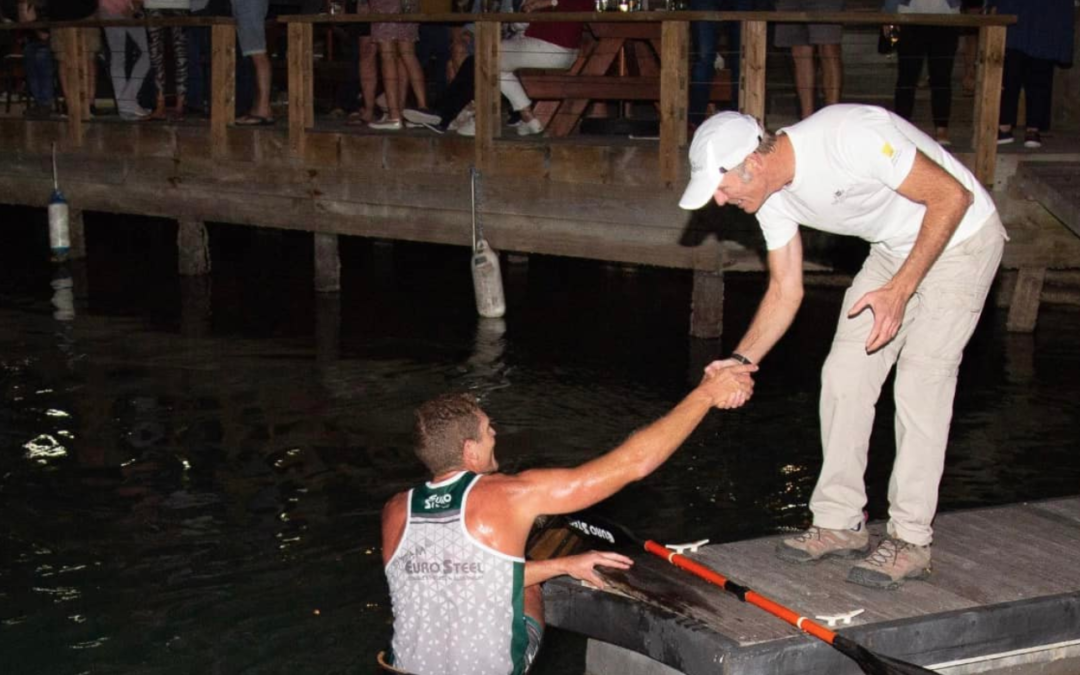 Richard Arderne congratulating Hank on 19 July 2018, after he set the new and still current world record.

The local Pam Golding office has decided that the first paddler who breaks Hank McGregor’s amazing record of 39min 00secs will win a bottle of Pam Golding red wine … and R10,000.

The St Francis Paddling Club members were blown away that evening when their long-standing record was shattered by nearly 2.5min! Not only the singles record, but he also bettered the doubles record! It was dark, he was on his own on a unfamiliar and winding course, but paddled at over 15km/h for 10km! It was a perfect evening, but the tide was only halfway in, so all the more remarkable.

But now that Jasper Mocke is almost local (living in JBay),  it might be time to break the 39min barrier! (he paddled a 19min 35sec 5km a few days ago!)

R10,000 is definitely not sufficient reward for the training required to paddle at that superhuman speed for 10km, so the Pam Golding office is hoping other sponsors will add to this amount.

Obviously there are strings attached! We would like the winner to pass on some of their magic to us by giving the paddling club a talk one evening after our Wednesday time trial and also give our academy paddlers some tips.

Top paddlers motivate us to keep fit .. they are role models and deserve recognition.

It is hoped that one of our club members will take the prize, with former world champ Jasper Mocke being the most likely but maybe Phil Smith or Riccardo Talevi

But the challenge is open to any paddler (without an engine!)