Kouga To Run Out Of Water Soon 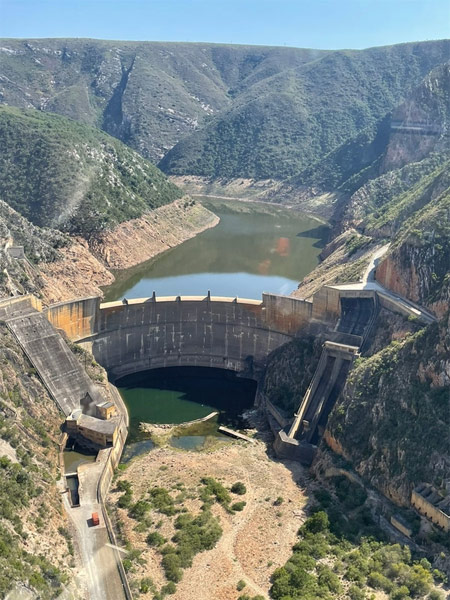 Kouga will be without water within the next four to five months should no significant rain fall in the catchment area very soon – especially with only nine weeks of water left for the Gamtoos Valley. Photo: Petrus Vermaak

KOUGA will be without water within the next four to five months should no significant rain fall in the catchment area very soon – especially with only nine weeks of water left for the Gamtoos Valley.

The combined levels of the dams that supply water to the region totalled 11.41% on May 24 as per the latest information from Nelson Mandela Bay Municipality. The two biggest dams, Kouag and Impofu, stood at 4.25% and 15.07% respectively. The Churchill Dam was at 23.76%, and the small Loerie balancing at 37.56%.

In a bid to prolong Day Zero, when taps could run dry, Kouga Executive Mayor, Horatio Hendricks, urged all residents and businesses to use water only when absolutely necessary and to erect rainwater tanks where possible, as well as to adhere to the strict water restrictions that are in place.

“With Thornhill already receiving water from municipal water trucks, the towns of Hankey and Patensie have been hit the second hardest as they depend completely on the Kouga Dam for potable water,” said Hendricks. “The level of the dam dropped to just over 4% this week – with Day Zero predicted for end of July this year.”

“Even though residents from Patensie will still be able to extract water from the Wolwekloof Dam (balancing dam) and two viable boreholes once the Kouga Dam has run dry, Hankey residents will only have access to borehole water that supplies in 40% of the current daily water consumption.

“The salinity of the borehole water is quite high, and residents are advised not to drink the water.

“The municipality is in the process of erecting five 5 000l designated water points in Hankey to ensure residents have access to clean drinking water. It is, furthermore, hoped to drill and connect more viable boreholes once funding has been secured.”

According to Hendricks, the Churchill Dam and Impofu dam, that supplies water to Jeffreys Bay, Humansdorp and St Francis Bay, are expected to be without water at the end of August and October, respectively.

“While residents from Jeffreys Bay and Humansdorp will have access to existing borehole water, the above average water consumption of residents in St Francis Bay and Cape St Francis is of great concern,” he said.

“If the water usage in these two areas is not reduced significantly by the end of July, the municipality will be forced to consider water rationing. We will give residents more detail as we closely monitor the water consumption over the next few weeks.”

Hendricks said the municipality is investigating the possibility of augmenting water supply from The Links, Eskom, Rebelsrus and the harbour.

As part of the municipality’s efforts to manage water usage, municipal taps are turned off at public open spaces and stringent measures have been put in place to ensure that the restricted allocation of water – 50l per person per day – is adhered to. The municipality is also working with law enforcement to enforce compliance.

“Every one of us has a role to play in preventing Kouga’s taps from running dry – we must do all we can to save water,” said Hendricks. “We can only save water while there is still water to be saved.”

Water leaks can also be reported through Kouga’s Link App.

The Link App is available for Android and iOS devices and can be downloaded at https://download.linkapp.co.za/#dl, from the Google Play Store or App Store.

Upon registration the App will request permission to access your location – this is important, be sure to accept.