King of the Kromme

The wind certainly did it’s very best to spoil this annual paddling event and no doubt it dissuaded several paddlers from competing in either the 22 kilometre or the shorter 12 kilometre event but those who did brave the wind deserve great applause. The stiff breeze, no it wasn’t a breeze one spectator commented, “it’s a howling bloody gale’!

After the start and moving to the Cove to see how the paddlers were fairing it was indeed an event that required not only commitment but a whole heap of tenacity and courage for nothing can be more disheartening when paddling with all one’s ability that one finds themselves actually going backwards rather than forward. Certainly some paddlers pulled out after being unable to beat the elements but even to them, well done for even trying.

The main race saw Matt Boumann crowned King of the Kromme ahead of Bevan Manson with Josie Williams in third. Great racing to all three of you and indeed the rest of the field who completed this gruelling challenge.

The event started and finished at St Francis Bay Paddling Club’s new headquarters based adjacent the new Quaysyde Restaurant in Sea Glades drive and what a great facility for not only the paddlers, but indeed for spectators too.

Josie Williams – third in the 22 Kilometre King of the Kromme

Having visited Quaysyde on a previous occasion we, St Francis Today, gave a rather critical review of the restaurant, not from a dining point of view but rather from a first impression. Well changes seem to have been made and it was a vast improvement this time around. Gone is the scruffy, barefoot manager who showed no interest in serving customers in spite of the restaurant being almost empty. Attitude can have a huge bearing on how something is perceived and this time the attitude was friendly, inviting and even our criticism of the menu seemed unfounded for it seems to suit the ‘vibe’. Service was crisp, attentive without being intrusive and unlike so many St Francis restaurants; we didn’t need to stand on the table to attract the waitress to bring the bill.

We shall be back and certainly support their efforts in securing a liquor license for it certainly is an upmarket facility and we doubt management is about to allow it to become a rowdy hangout. Oh and the menu well maybe because the waitresses seemed enthusiastic the menu seemed more inviting. There is something for everyone including for the kids but it seems fish dishes need to be added for those who enjoy their food harvested from the sea. 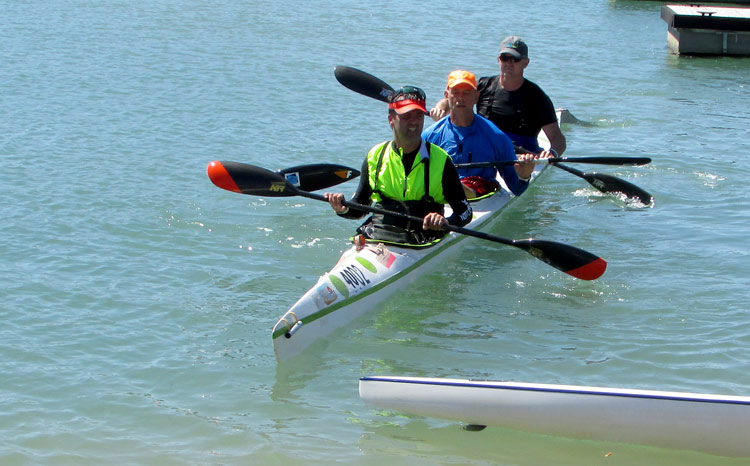 Three men in a boat

All hail the King

King of the Kromme Matt Boumann all 2.08 m or 6’8″ with Stephanie Ernsten. – Photo thanks to Nevil Hulett

A great day in spite of the wind!