The JBay Winterfest presented by Woodlands Dairy opens today, Wednesday 6 July, and it promises to be a spectacular start to the festival. Wild weather, gale force winds and the promise of great waves at Supertubes will most likely see the Samsung Galaxy Championship Tour event, the JBay Open, get off to an early start. This event, number 6 on the Championship Tour, comprises the best surfers in the world, including previous world champions Kelly Slater (USA), Mick Fanning (AUS), Joel Parkinson (AUS) and Gabriel Medina (BRA), as well as current world champion Adriano de Souza (BRA) and two times event champion Jordy Smith from Durban.

There is a chance of the JBay Open continuing into Thursday, as well as a new swell building for Saturday, so all in all an exciting start for the JBay Winterfest.

The Quiksilver JBay Junior Pro and the Roxy JBay Junior Pro events are both set to begin at Magnatubes on Friday, running through to a final on Sunday, and the best junior surfers in the country will be in attendance.

In the premier U18 boys division competition will be fierce with the likes of Jordy Maree (Kalk Bay), Adin Masencamp (Strand), Bevan Willis (Salt Rock) and Jeffrey’s Bay local Joshe Faulkner all capable of big scores and aggressive surfing. Sebastian Williams (Durban) and Koby Oberholzer (Warner Beach) have both been in good form and remain two of the favourites in the boys U16 division while the Kommetjie duo of Travis Pearce and Manoa Robb as well as Mitch Du Preez (East London) seem to be the form U14 surfers looking to take out the title. Christian Venter (Melkbosstrand) and Luke Thompson (Durban) are two surfers in the U12 division that have been very consistent in 2016 and are both looking to stake their claim and impress in Jeffrey’s Bay.

In the Roxy Junior Pro U18 division favourites include Sophie Bell (Salt Rock), Teal Hogg (Umhlanga Rocks), Taghiti Gericke (Southern Cape) and Chrystal Hulett (St Francis Bay). Other divisions to be showcased for the girls include U16 and U14 age groups. 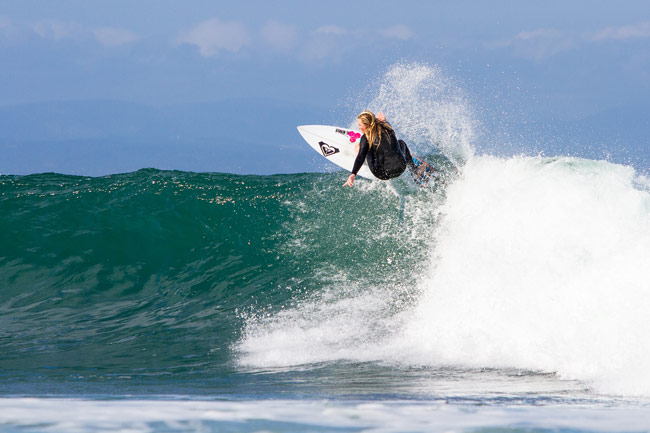 ‘Magnatubes is such an awesome venue for the young surfers, and we expect to see a very high calibre of surfing. The fact that competitors also get to watch the worlds best at the J-Bay Open just walking distance away at the infamous Supertubes is a huge bonus,” said Quiksilver’s Dane Patterson.

The JBay Winterfest presented by Woodlands Dairy has a jam-packed line-up up of events until the 17 July. The MusicFest will see Australian duo Cut Snake, comprising former pro surfers Paul Fisher and Leigh Sedley, getting the house rocking at the Jolly Dolphin on 14 July with their mix of groovy deep house and tech house.

The JBay Windfarm MTB Classic will take place on the 16 July and has something to offer for all riders. It will feature three routes, 25km, 50km and 85km, and the event also carries the unique distinction of being the only MTB event in Africa to run through a wind farm.

The Oakley X-Over presented by Seartec is now in its third year and the event will take place on 13-14 July. The Oakley X Over consists of a golf tournament at The Links in St Francis, a mountain bike race at Kabeljous in JBay, and a surfing event at the Lower Point in JBay.

The unique J-BayX Trail Run event entails three individual trail runs, all starting 12-hours apart, showcasing the best of the Jeffreys Bay area. The total distance covered will be just over 60km and will be a serious test of endurance. Exciting news for 2016 is that all 3 events will start and finish at Impala Ranch, a stunning trail run with two new exciting 20Km routes specifically designed for the 2016 edition of the J-BayX.