The world’s top surfers have arrived in Jeffreys Bay, South Africa, for Stop No. 6 on the 2017 World Surf League (WSL) Championship Tour (CT), the Corona Open J-Bay. The event window opens today and runs until July 23, 2017 and will resume this season’s thrilling title race, with the top five athletes on the Jeep Leaderboard separated by just 600 points. 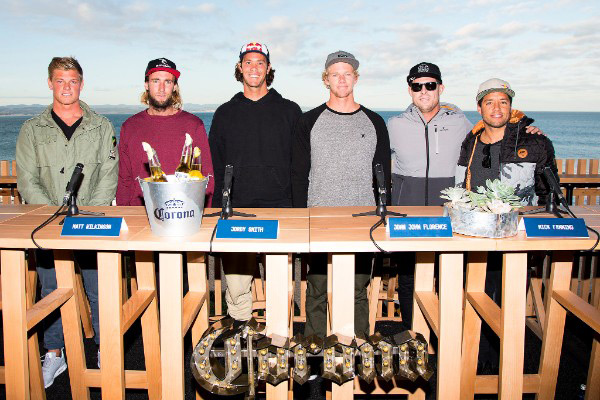 Current No. 1 on the Jeep Leaderboard Matt Wilkinson (AUS) returns to South Africa this year wearing the Jeep Leader Jersey at this event for the second season running after his recent win at Stop No. 5 in Fiji. The Australian will need a strong result at Jeffreys Bay to retain the yellow jersey with four surfers close behind him on the rankings. Wilkinson will match up against Jeremy Flores (FRA) and Ethan Ewing (AUS) in Round 1.

“Coming into the last event the Jeep Leader Jersey didn’t even seem like an option so to come out of Fiji back in the yellow jersey is great,” Wilkinson said at the press session today. “At this stage last year I had a pretty solid lead for the first time in my career, which really came out of the blue. Now I feel like it’s different and there’s four guys right behind me by only a few hundred points. I’m really excited to be back in this position and hopefully this year I don’t fall off so many times out here and I can win a few heats.

“Last year I came here in a strange situation and it was a bit scary,” continued Wilkinson. “Now I know that unless I keep attacking for the rest of the year I’m not going to keep this position. I’m more aware of what it’s going to take and I’m definitely excited. It’s about time I step it up and win this for the goofy-footers. When it was big and pumping out here in 2014 it felt like the best back-hand surfing I’ve ever done. The forecast is looking really good so hopefully I can do it again.”

“J-Bay was a great event for me last year and surfing in that final with Mick (Fanning) was incredible,” Florence said. “I’m excited to get some waves this year and hope we get some firing barrels. My goal is to win another world title for sure but you never know what happens and there’s still a lot of events to go. I learnt a lot last year and I’m going to keep working hard and keep learning.”

Three-time WSL Champion and four-time event winner Mick Fanning (AUS) is yet to make it beyond the Quarterfinals this season and sits outside the Top 10 in 13th place coming into the event. The defending event winner is one of the most dominant surfers at Jeffreys Bay and in need of a strong result to move up the rankings. Fanning will take on Sebastian Zietz (HAW) and Joan Duru (FRA) in Round 1 of competition.

“I really feel at home here and so comfortable and relaxed,” said Fanning. “The people are so nice and the wave is amazing. When you come to a wave you love then the excitement levels really goes up and I feel much more motivated. I get up early in the dark each morning to check the surf and I can’t wait for things to get underway. This is a place that I really look forward to each year.”

Two-time event winner and the sole South African on the Championship Tour Jordy Smith (ZAF) is currently tied in third place on the Jeep Leaderboard. Fresh from victory at the Ballito Pro Qualifying Series 10,000 event, Smith looks in fine form and will battle Conner Coffin (USA) and Michael February (ZAF) in Round 1.

Jordy Smith in action during his victory at the Bells Beach Pro in Australia at Easter – Photo: WSL / Sloane

“This is by far one of my favorite places in the world and I love coming here each year,” said Smith. “I don’t feel much pressure surfing in front of my home crown because I’ve surfed here my whole life. The year for me has been great so far but it’s such a tight world title race. I’m extremely thankful and excited to be in the position I’m in now and I don’t think I’ve been this excited since I qualified for the tour. My year starts now and I know I’ve got to put my head down and give it everything.”

2015 WSL Champion Adriano de Souza (BRA) sits in equal third place on the Jeep Leaderboard. With a win at Supertubes in 2012 when the event was on the Qualifying Series and a string of Quarterfinal finishes, the Brazilian is keen to improve upon his past results. De Souza will surf against Frederico Morais (PRT) and Jadson Andre (BRA) in Round 1.

“I definitely feel better now than in 2015 when I was carrying the yellow jersey for six events and felt a lot of pressure,” said De Souza. “I’m feeling great and very blessed to be back here. I’ve been here for two weeks so I’ve had some time to work on my surfing and get some time before everyone else got here. I want so badly to win this contest – I’m excited and want to do well. I’m trying not to bring pressure to the ocean. 2012 was such a special year and those memories are some that I’ll keep forever and this year I hope we have waves like that again. We have a different story and a different scenario this year and I can see everyone really fighting for the world title here in Jeffreys Bay this year.”

Local surfer Dale Staples (ZAF) will join the WSL Top 34 as a wildcard after winning the 2017 edition of the JBU Supertrials and takes on Florence and 2017 WSL Rookie Ian Gouveia (BRA) in the opening Round of competition.

“Surfing J-Bay with just a couple of guys is just incredible and I can’t wait,” said Staples. “When I first competed here I was new on the QS but I’ve had had some more time now and I’m more confident and feeling much better about competing this year.”

Staples will be joined by fellow South African Michael February (ZAF) who has been awarded the second WSL wildcard after a stellar run of results on the Qualifying Series (QS) this year. February will face Smith and Conner Coffin (USA) in Round 1.

“I’m really, really happy about the wildcard for J-Bay,” said February. “Reaching the Semis at Ballito was such a cool achievement and then when Travis Logie (WSL Deputy Commissioner) told me about the wildcard I was really stoked.

“I was given an injury replacement spot at J-Bay in 2015, but that was a last minute decision so this time I have a little more time to prepare for it,” continued February. “The forecasts look like the event will start a couple of days into the window period and after this last result I’m feeling comfortable and couldn’t be better prepared for going into a CT event.”

Corona, title partner of the event, will be showcasing their partnership with Parley at the event and reinforcing their commitment to protect the oceans, bringing Parley for the Oceans’ AIR strategy to end marine plastic pollution (Avoid; Intercept; Redesign plastic) to a WSL audience. Corona and Parley for the Oceans are working together to apply this thinking to the event and are developing several initiatives to reduce the plastic footprint of the Corona Open J-Bay event, educate surfers and audiences about the need to develop more responsible behaviors when it comes to single-use plastic, and raise global awareness of this issue.

Surfline, official forecaster for the Corona Open J-Bay, are calling for:

Small/fun SSW swell will build through Wednesday before easing on Thursday. A larger swell is expected to build through Friday before temporarily trending down on Saturday. Medium size (or possibly better) SSW swells are lining up for Sunday and Tuesday as well.

The event will be broadcast LIVE via WorldSurfLeague.com, the WSL app and on Facebook LIVE via the WSL’s Facebook page. Also check the local listings for coverage on CBS Sports Network in the U.S., Fox Sports in Australia, ESPN in Brazil, Sky NZ in New Zealand, SFR Sports in France and Portugal and as part of the EDGEsport Network.

For more information, check out WorldSurfLeague.com.