Time does seem to fly when you’re having fun. It seems just the other day that we were thinking about publishing a new online surfing magazine.with the hope of making a few people laugh. 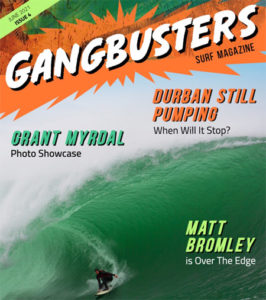 We had some support from the start, and that support has been growing nicely as more and more people realise that if they want to keep up with the world of surfing in South Africa, they might have to move off the endless Facebook and Insta photos, to get a decent take on the whole thing.
There is so much happening right now in the digital space that one needs to figure it out and embrace it somehow or be forever wondering wtf just happened.
There are some fabulous websites out there.
We have Magicseaweed, Stab, Beachgrit and Wavescape, where we can consume cool stuff daily, and a few classic movies are being made and distributed. We have movies like Satori, Matt Bromley’s new Over The Edge movie coming soon, and John John’s crazy Maps Of Home movie.
People are making fantastic online series, like Kai Linder and The Regular Guy. There was the successful Rip Curl E-Pro, part of the Surf Web Series last year – and there is the digital version of the Rolling Retro rolling out right now (did you see what we did there?)
Among all of this is little old Gangbusters Magazine (issue 4 ekse), with its passionate bunch of supporters and advertisers and a steadily growing fan base of strange people. We’re doing something a little bit different and not too worried about where this is all going, as long as we’re having fun along the way and not just desperately trying to keep up on social hubs. To steal a quote from Elvis Depressedly, “we want to try a few new things and do weird shit and maybe fail.”
We have an interview with cover boy Matt Bromley, and we have a classic ‘best-of’ from the photographer, snowboarder and 1987 Billabong Country Feeling winner Grant Myrdal.
There’s some more of the gold that Dave Lindemann has been capturing in Durban as the boys get an absolute epic start to winter. Next, Melissa Volker dives into the dank facts behind pay parity in surfing, and we slide over and cover how the WSL events went in Australia and how Matt and Jordy fared (not too shabby).
If you like it, please share it and find us on socials and donate us a few likes or send us a few dogecoins or whatever form of happiness currency you’re using.
If you don’t like it, then please don’t bang the door on your way out.
We have something big planned for the next issue. Something about as mind-blowing as the sugar rush from a double rum and coke, so pretty huge. So try and keep a lookout for that, somehow, maybe even on Facebook.