For many years, the membership of FOSTER remained fairly static at around 100 members which brought in around R30 000 of the R100 000 needed to maintain the reserves. The committee is pleased to report that for 2021 membership as at the end of June has increased to 189 members meaning that a 100% increase for this year is certainly attainable, (we do have an ambitious target of 300). Foster would like to thank all those who renewed their membership and welcome and thank the new members that have joined Foster. This means that that half of the annual running costs can now be covered by the membership fees generated.

A really positive development has been the number of new members from St Francis Bay who have joined and who realize that the reserves are for all who live in the greater St Francis area. We encourage everyone to use them and of course to become FOSTER members so that these unique and important reserves can continue to be an asset for all in our greater community.

Foster has always been dependent on donations and fund raising to cover the full costs and has been able to raise additional funds for special projects, meaning that the FOSTER reserves remain largely alien free with a network of well-maintained paths and trails for the use of our community to walk, run and cycle on. With COVID fund raising has been difficult, however there have been some remarkably generous donors who have come to the fore with one new generous member donating R50 000 meaning that our running cost will be covered for 2021 allowing FOSTER to consider tackling some additional projects if we are able to get some fund-raising initiatives in place despite the pandemic.

Those using the various paths will no doubt have noticed the widening of the path between St Francis-on-Sea and Cape St Francis making it safe and easy to use for both walkers and cyclists. Foster would like to thank the St Francis Bay Cycling club for their 50% contribution to the costs of the clearing and widening of this important path in the Cape St Francis Nature Reserve. We have also been able to now maintain the path leading to the lookout point next to the beacon in this reserve which offers the most spectacular views stretching across the two bays stretching from the lighthouse to Jeffrey’s Bay and the b Cockscomb Peak in the north. Maintenance is ongoing and once complete, will be named the Two Bay Trail and should be a must-to-do, for all able-bodied residents and visitors alike.

Through FOSTER’s persistent efforts, it was able to arrange for the Working on Fire to clear a firebreak in the Cape St Francis Nature Reserve bordering the CSF houses, and for the Kouga Municipality to remove the cuttings.

Other paths and trails continue to be maintained including the dedicated cycle paths in the reserves by Dave Bowmer and his team. The St Francis Bay Cycle Club has agreed in principle to fund 50% of the cost of maintaining the pedestrian trails shared by the cyclists. Having a good relationship with the Cycling Club is important to FOSTER. Therefore, we have created a dedicated portfolio on the committee to ensure that this relationship is nurtured and maintained. The Cycling Club remains fully responsible for maintaining the dedicated path in the Seal Bay Nature Reserve around the Lighthouse.

The 4 reserves that Foster looks after cover about 300 hectares which is home to shrublands of fynbos with patches of thicket, and even forest trees. Whilst plants seldom elicit the same kind of response in people as animals do, our reserves contain some rare locally endemic plants well worth preserving for the current and future generation. As an example, an endemic sub species of sea lavender grows in the Seal Point nature reserve that has not even been cataloged yet. There are of course animals to be seen as well in the reserves, ranging from bushbuck, caracul, Cape genet, bushpigs and otters to name a few, the bird life is also abundant and many a birder as been able to boast of rare sightings especially in the Seal Bay nature reserve.

Most people are not aware that when they walk the paths around the lighthouse that that are in the Seal Point Nature Reserve. So, whether a regular visitor or a first timer, please consider supporting the work that FOSTER does to maintain these special reserves and consider becoming a member or making a donation (or both). It’s just R300 per year for a family or R200 per annum for individual membership, details on our website at foster.org.za. You can either do an EFT or pay via snapscan.

Remember the FOSTER-managed reserves are for all to use and enjoy and are not the preserve of the residents of Cape St Francis, the Committee or any other groupings, but we your membership fees to continue with the work that FOSTER an PBO does. 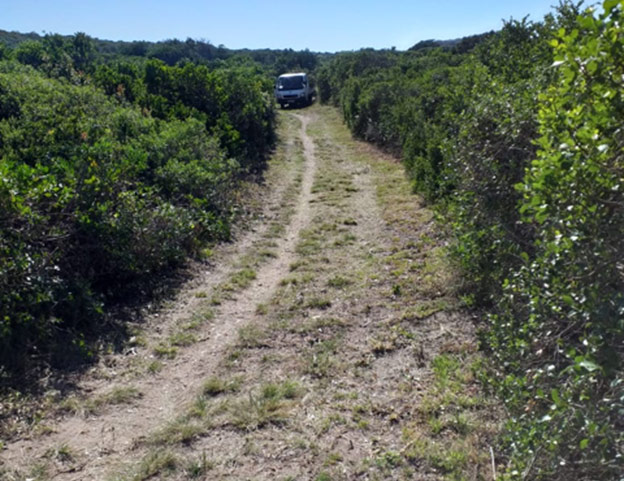 Shared cycle/pedestrian trail through CSF Nature Reserve widened to safely accommodate both types of users, and for firefighting access. The maintenance vehicle shown is removing the cuttings. 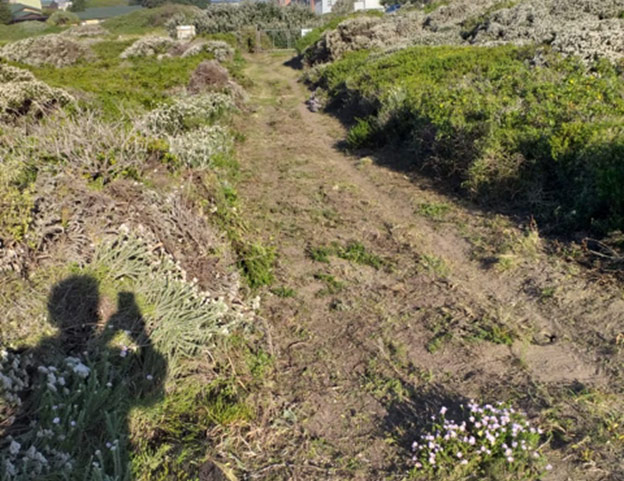