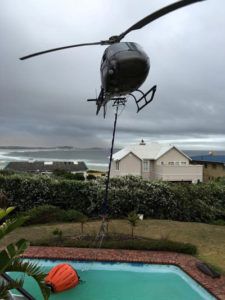 Reading the news of the terrible fires presently raging in Somerset West is a grim reminder of the fires that threatened Cape St Francis, the Airpark and Sea Vista almost a year ago. Who of the many who congregated at various viewpoints in Cape St Francis can forget  how we watched anxiously as the raging fire approached, threatening to engulf all before it. There was no panic but rather a sense of general helplessness as we watched, as much in awe as in fear, knowing that little could be done to arrest the orange tide inferno consumed metre by meter of the fynbos in its path heading for the northern parts of Cape St Francis and the Airpark .

With essential possessions hurriedly packed into every nook and cranny of cars and bakkies as household after household was evacuated, one could do nothing but hope for a miracle. The dark hours between sunset and sunrise were undoubtedly the worst for in the darkness, the helicopters that had fought such a gallant battle the day before, remained grounded.

And then the sun started to light the eastern sky and as it broke the horizon the marvellous ‘whoop-whoop’ sound of helicopter blades brought a new hope with the fire but yards from the first houses. Never has the feeling of the spray of water felt so welcomed as the we stood at the entrance to Cape St Francis Resort close enough to be able to not only feel the heat of the fire but also the spray of the water being dropped by the brave pilots who were seemingly now, our one hope.

Certainly it was not over but at last the fear of losing all was diminished. Whilst the helicopters played a huge and very visible part in extinguishing the fires, not to be forgotten are the fire teams that went with little sleep for the next four days as they fought the war on the flames, day and night until finally they could claim victory.

And so out thoughts go out to those in Somerset West who have been facing a similar peril and trust that with the help of helicopters and the dedicated fire fighters, who no doubt,  like our fire crews come from all walks of life in their community, are willing to life and limb to save their town.

Following the fires in St Francis last year, a disaster management plan has been all but been finalised by a volunteer committee formed to consider and plan for most possible disasters that my befall St Francis be it a fire, flood, civil unrest or even acts of God that may seem unlikely but are not impossible. Driving by the Fire Station on St Francis Drive you may have noticed building alterations have been made to the fire station. These alterations, approved by the municipality, will house the Disaster Management Control Centre in event of a disaster and will be manned by trained, capable and experienced members of the Disaster Management team to co-ordinate all aspects of any impending threat.

FOOTNOTE: On Christmas Day a fire burning on the Oyster Bay road activated the communication network of the recently formed St Francis Disaster Volunteer Group (SFDVG) with members keeping a close watch on the situation and were ready to activate disaster management plans should the need have arisen.