Final team arrives and the party is on 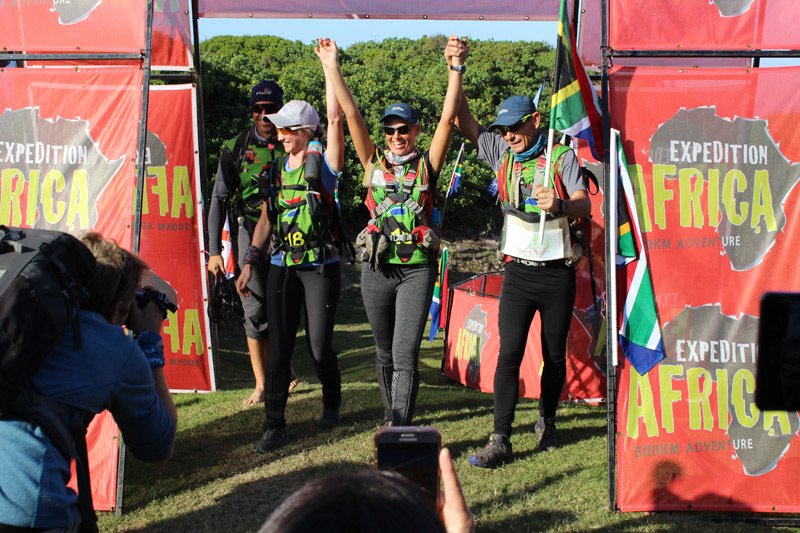 Team Flud arrives after 150 hours on the raos

It is almost inconceivable the mental strength the back runner teams on the Expedition Africa must have had to keep going, knowing they were never in the prizes, yet they did. Two teams in particular must be congratulated for their fortitude. Team Cape St Francis team made of two ladies rather than just one as with the rest of the teams, finished late on Friday night after some 134 hours on the road with Team Fluid, the last team to cross the finish line on Saturday afternoon after over 150 hours on the gruelling course of this year’s Expedition Africa.  These are the real heroes of the event for they were not racing for glory but just the reward of achieving what must have seemed impossible at times. But they persevered and finally achieved their goal – to finish.

As written in a previous post last week, it is those who make up the back runners that make events such as this the success they are. Be it the Comrades, the Dusi, King of the Kromme or a community fun run, they don’t make up the numbers; they are the heart and soul of these events.

With the ending of this fantastic event many locals will be left with a void in their lives for a few days for there is no doubt it captured many of our lives for seven days. So many joined in by volunteering their services by manning the many control and transition points on the challenging course through some of the wildest and beautiful parts of the greater Kouga. These volunteers must be thanked for without their help this event could never have been the success it was. Camped out in the cold of night waiting hour after hour for the next team also must have had them wondering what they had gotten themselves into but they too persevered and stuck to their posts.

A word of thanks must got out to Stephan & Heidi Muller for bringing Expedition Africa to our region and for brightening our lives with such an exciting and prestigious event. Almost a year in the planning, their organisational skills are quite honestly, incredible. The logistics of planning and running such an event are quite simply mind boggling! Moving kayaks and cycles from one transition point to another in time alone was amazing.  So too was their reporting on the progress of the teams with their live tracking and continuous stream of news on social media. To see some of the great video of the event go to the official website expafrica.live.

Tired bodies and no doubt minds, gathered along with volunteers and locals to celebrate the event  at Cape St Francis Resort for the Prize Giving on Saturday evening.

First prize and free entry into the AR World Championship to be held in Colorado, United States later this year were, if you don’t already know, Team Skylotec Adventure from Sweden  with second place going to Team Thunderbolt AR from Australia and in third, the leading SA team, Team Nevarest Jabberwok.

Fasie Malherbe added to the occasion with a surprise where he offered a team voted for by the other competitors, a choice of a 10-day holiday for 10 people at any one of his properties – Cape St Francis Resort, Casa Malcampo situated in the small fishing village of Tofo, in Mozambique or Villa Tapenade in Croatia. The teams voted Team Cadena Challenger from Mexico as the lucky recipient of the prize.

Thankyou Stephan and Heidi for bringing Expedition Africa to our shores. It is an event that will live long in many of our memories and certainly many of us will be glued to social media next year when you repeat the event for the fortunate community of the Namaqualand Coast.