Even the Royals had to follow the lockdown rules. 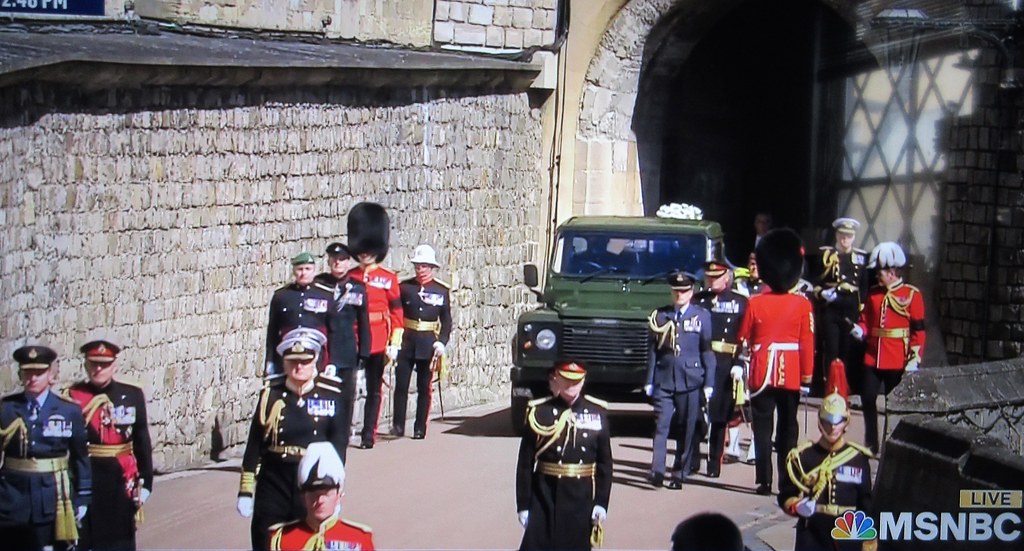 I am neither ashamed nor embarrassed to say that I cry at funerals and that is why I have made a pledge not to attend funerals of people I know. So watching the funeral of Prince Philip whom I obviously didn’t know personally didn’t raise a tear but it did rather cause a momentary lump in the throat, for indeed it was a sad event. But rather than the sadness on the event, there is something to be said for the pomp and ceremony on matters royal.

Local TV stations seem to broadcast the funerals of every cadre of late and it is not unusual for all three news stations to televise the same funerals at the same time ignoring that there is far more important matters to inform us.  All one needs is an ANC connection and your funeral will be on TV which surely must question who is running our TV stations.  Gatvol of these almost everyday broadcasts I had absolutely no intention of watching Prince Philip’s funeral.

Waking up from a speed nap on Saturday afternoon I turned on the TV whilst waiting for the kettle to boil for a cup of coffee and there it was, all the pomp and pageantry that are synonymous with Royal events. And who can ignore watching when those bands strike up.  So now well and truly hooked on the music I kept on watching.

Although christened in the Cathedral of Johannesburg and serving as a choir boy as a youngster in our local Anglican church, I have no doubt disappointed both my very religious grandmother and mother alike in choosing to not follow my religious roots. That said much of the  ceremony of that church does seemingly reside in my sub conscious so the hymns and the chanting were not unfamiliar to me and so I delayed switching to Netflix to listen to the service as I pottered.

My decision to keep watching was actually cemented when the first hymn was sung for the last time I recall hearing that hymn was at father’s funeral way back in 1964. The hymn “For those in Peril on the Sea” was in recognition of his, the Prince’s, service as a naval officer. My late father also served at sea during WW2 and was in fact was torpedoed whilst in the Mediterranean sea so certainly at peril in the sea for a moment of time until rescued.

Having just 30 mourners at that cavernous cathedral seemed rather sad and one would have thought an exception could have been made for the Queen but in true British spirit the Royals obeyed the rules even if there were a couple of hundred military personnel outside the venue. All seems a little pointless but so has everything else about this pandemic. No doubt if this had been in SA with ANC “royalty” there would have been thousands of mourners allowed including a few MK types with army officers not knowing their left from their right as demonstrated at a similar event recently.

The other aspect of the restrictions in numbers brought to mind the reality of how many people worldwide have been unable to pay their last respects to family or friends who have died not only of Covid but of the many other causes that seem to have been forgotten as being just as sad as a Covid death. So sad and one cn only wonder how many have never managed to bring closure to their loss.

With Covid infections falling, in South Africa at any rate, we can only live in hope that Mother Earth is going to give us a break and let us return to normality so that maybe we can enjoy another traditional British spectacle due to reach our shores in June, The British Irish Lions Rugby tour.