Egrets, herons, cormorants cause a stir

A hostile up-roar ensued when egrets, herons and cormorants chose to breed in alien pine trees growing on the pavement in a residential area of St Francis Bay. The Kouga Municipality, Department of Economic Development, Environmental Affairs and Tourism, health officials, and nature lovers were all drawn into the affair (and certainly did not flock together in opinion) and the conflict had the potential to become a legal issue with huge costs involved.

On the one hand, the municipality was called in to remove the trees and a potential health hazard, and at the same time nature lovers insisted that the birds be allowed to breed once nest building had started. Such an up-roar ensued that the municipality halted the felling process and the birds continued with the breeding cycle.

What is not generally known is that birds in numbers such as this excrete an enormous amount of ammonia-smelling excrement which covers all ground in the vicinity, roofs, walls, fences, plants etc. Noise from chicks soliciting for food continues throughout the day and night; dead chicks fall to the ground attracting flies, lice etc. and the accompanying odour is appalling. This becomes a health hazard as it did in this case.

Matters came to a head when the health of the person concerned developed a respiratory problem and medical help was necessary and intervention called for. The municipality was recalled and the trees were thus felled.

The owner of the affected house, once the trees were removed, incurred enormous expense trying to rectify the physical mess that had been left, as well as her health which has not yet recovered. Her home had to be fumigated twice; excrement (several centimetres thick in some places) removed from walls, roofs, fences, and the ground below. A pressure hose had to be hired. All the ammonia impregnated soil had to be removed completely and new soil brought in to the area below the trees.

All this could have been avoided had timeous action been taken before the actual breeding cycle had started. Unfortunately the breeding had started and some chicks were rescued and taken to the local vet. The birds suffered trauma when the trees were felled and flew round frantically looking for their nests and chicks.

To avoid a repetition of this unfortunate occurrence on municipal or private property timeous steps should be taken to discourage the birds from breeding in a place that would cause conflict with human habitation. They might be driven off by noise when they first show a preference for a tree that is too close or perhaps branches that could be used for nesting purposes could be trimmed or the chosen tree might even have to be felled before nesting takes place if there is no other solution.

The problem is not an easy one but a lot of heartache could be avoided by doing the right thing in time.

Wildlife photographer, Carolyn Greathead, witnessed the distressing scene when the birds returned to their nests and chicks to find them gone, and filmed them flying or sitting around in confusion.

Some of the concerned birds settled on nearby bushes 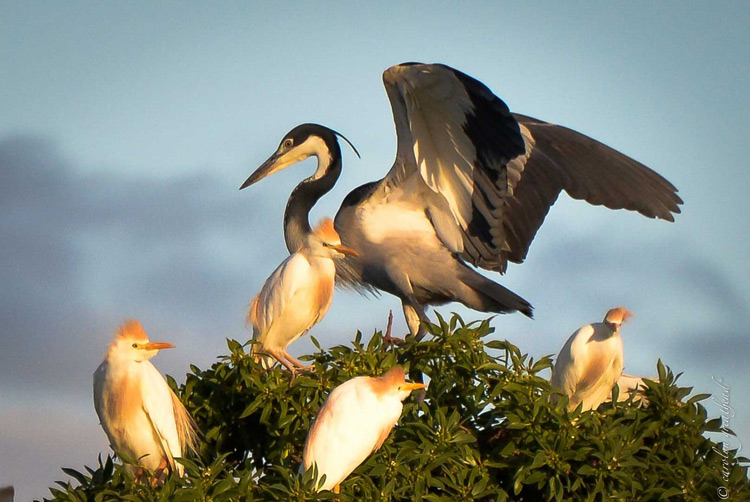