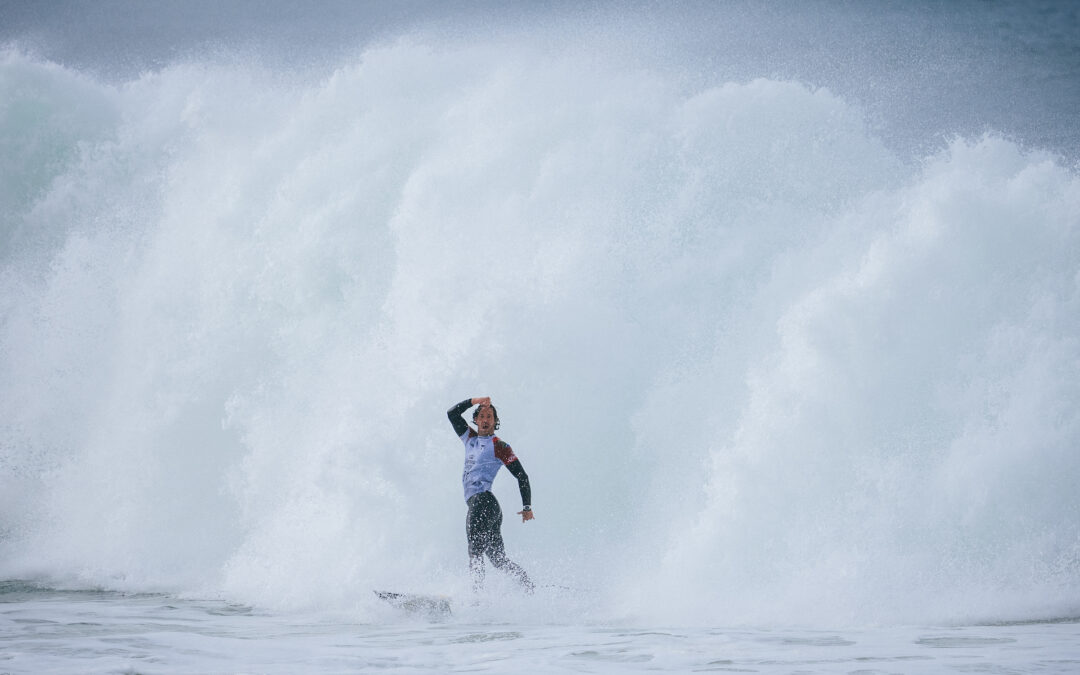 JEFFREYS BAY, Eastern Cape, South Africa (Thursday, July 14, 2022) – The Corona Open J-Bay, Stop No. 9 on the World Surf League (WSL) 2022 Championship Tour (CT), was welcomed by picturesque conditions at the world-renowned Jeffreys Bay in the Eastern Cape of South Africa. Four-to-eight-foot waves with clean conditions hosted the world’s best surfers in men’s Elimination Round 2, the men’s Round of 16, and the women’s Quarterfinals.

The right-hand canvas allowed surfers to shine, but the day did not go without drama and upsets. In particular, Carissa Moore’s Quarterfinal heat, Yago Dora dispatching World No. 1 Filipe Toledo, alongside Stephanie Gilmore’s and Jordy Smith’s J-Bay masterclasses. 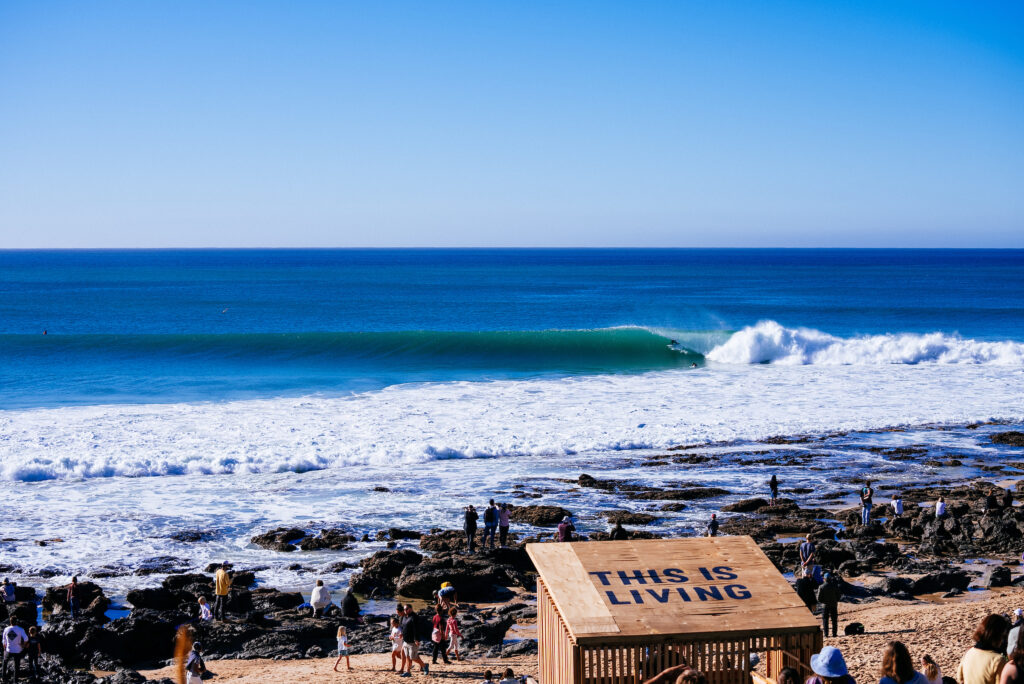 Lineup during the Opening Round at the Corona Open J-Bay. (Photo by Alan van Gysen/World Surf League)

Carissa Moore (HAW) had a nightmare start to her Quarterfinal today as a big clean-up set broke right on top of her after mistiming her paddle-out from the keyhole. Her board was snapped in half, and she had to swim back in and run around the point to get a backup board before paddling out for her heat against Caroline Marks (USA). The five-time World Champion finally shook off the nerves with her opening ride for a 6.67 (out of a possible 10). Marks only banked two low-range scores but was in the lead by a small margin. Moore waited patiently for a set wave in the dying seconds and scored the best wave of the heat to advance into the Semis.

“It’s pretty hard to reset after something like that happens,” said Moore. “I was running up the beach, and my whole team was there. So much happens in a heat. It’s mother nature, and our canvas is always changing, so you must adapt. It helped that Caroline hadn’t put a score on the board, so it was like we were starting from scratch. Time was winding down, and I only needed a 2.26, so I knew I just needed to do a turn and a half, then that wave came, and it allowed me to do more, so I’m really grateful.”

Seven-time World Champion Stephanie Gilmore (AUS) demonstrated her superiority in right-hand point breaks and defeated rookie Gabriela Bryan (HAW) in the Quarters. The Australian selected the best waves in a firing J-Bay lineup and surfed them to perfection, dropping two big scores for the winning spot into the Semifinals.

“We’ve been sitting and watching the boys getting barreled all day, so it’s hard not to imagine yourself doing the same thing,” Gilmore said. “I was lucky there were so many sets and opportunities. I just knew if I could pick the eyes out of it and get one with a tube at the end, I could get a good score. That heat was crucial for me, and I knew I had to capitalize on these moments. So it’s kind of pedal to the metal to the end.”

After missing two CT events, Tyler Wright (AUS) is hungry for a good result. She dispatched World No. 2 Johanne Defay (FRA) in pumping Supertubes to secure her spot in the Semifinals.

Joining the Semifinalists will also be Tatiana Weston-Webb (BRA), who defeated Brisa Hennessy (CRI) in the last heat of the day and with the biggest performance of the women’s draw so far. The Brazilian went all out with critical turns right under the lip of the double overhead waves to score a near-perfect 9.27 and backed up with a 7.93.

World No. 1 Filipe Toledo Falls in Round of 16

Yago Dora (BRA) upset the two-time Corona Open J-Bay winner, Filipe Toledo (BRA), by eliminating him in their Round of 16 matchup. Dora, the 2022 injury replacement, was behind and chasing for most of the heat. Still, he found an incredible wave to lay down three big backhand turns before getting slotted super deep on the inside. The judging panel gave it a near-perfect 9.50, and Dora moved on to the Quarterfinals, sending the 2018 J-Bay winner home in 9th place.

“That wave was just incredible,” Dora admitted. “It was one of those gifts, I knew I needed a score, so I was a bit nervous, but when I got the wave, I knew it was an opportunity to do it. I got two barrels and did my best to hold on and come out of the last barrel. I was super happy, and I knew I was going to get what I needed. I don’t have much experience out there, to be honest, but I just love this place and this wave.”

World No. 2 Jack Robinson Continues Through to the Quarterfinals, Takes Down 11X World Champion Kelly Slater.

The current World No. 2 Jack Robinson (AUS) had to pull all the stops to defeat 11-time World Champion Kelly Slater (USA) in the final moments of their battle. A very tense heat until the last minutes, Slater started on a wave needing a mid-6 score, which he eventually got. Still, on the very wave behind him, the West Australian surfer found one of the deepest tubes of the event so far and posted a final score of 9.10 to make his way into the Quarters.

“I was excited to have a heat with Kelly here,” Robinson said. “I had to contain myself because the waves were so good.” 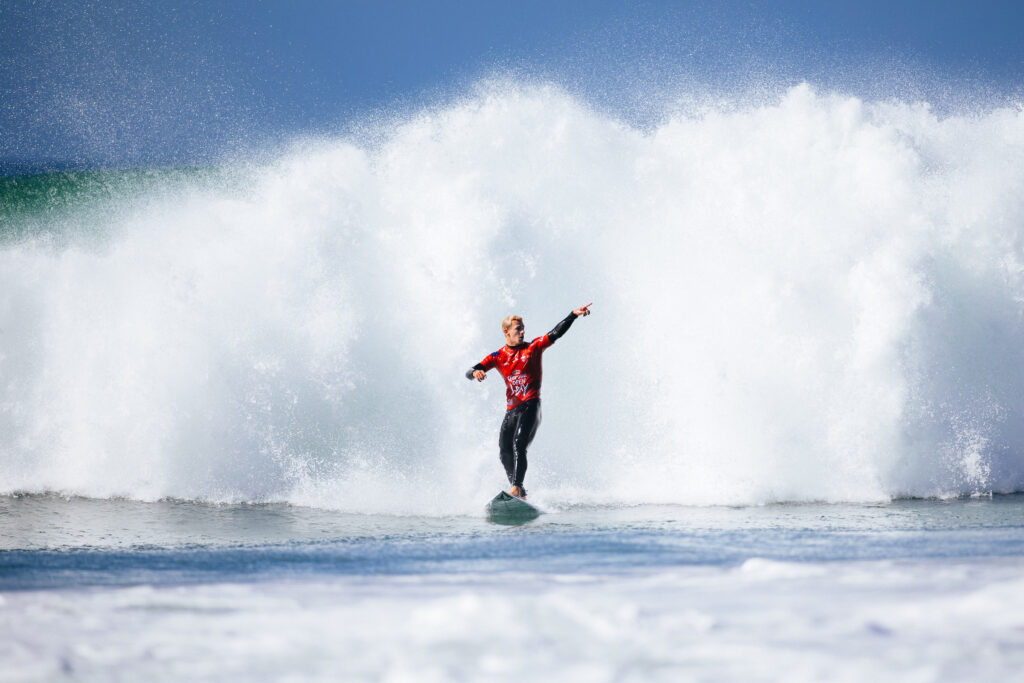 Crowd favourite Jordy Smith (RSA) put on a clinic against Kolohe Andino(USA) in the Elimination Round this morning with two excellent scores above 8 points. The South African kept his momentum going into the afternoon and upped the ante with a 9.07 and 7.70 for a 16.77 (out of a possible 20) total to take a second straight win against Griffin Colapinto (USA) and move into the Quarters. A back-to-back winner at J-Bay in 2010 and 2011, Smith’s last win was a long five years ago, and he’ll be looking to get back on to the highest podium spot this week.

It was a heart-wrenching loss for the locals when hometown hero Matthew McGillivray (RSA) was knocked out of the competition by an in-form Ethan Ewing (AUS). McGillivray lit up the crowds when he took off deep for a long barrel ride and backed it up with another frothy tube. Ewing responded with smooth rail work and power carves that cut through the Supertubes walls like butter. Unfortunately, McGillivray made a few wave selection mistakes and exited the competition earlier than South African surf fans would’ve liked.

Local wildcards Joshe Faulkner (RSA) and Luke Thompson (RSA) were eliminated from the competition by World No. 1 Filipe Toledo (BRA) and No. 3 Italo Ferreira (BRA) in Elimination Round 2 earlier in the day.