David slays Goliath in the “Battle of the St Francis Canals”

30th November 2017: Judgement of “Appeal Dismissed with Costs” has just been received on the November 10th “David vs Goliath” confrontation in the Bloemfontein Supreme Court between Attorney Gerald Friedman representing Nevil Hulett on the one side standing alone against Advocate Christo Stockenstrom, Advocate J P Vorster s.c. and their team of lawyers and advisors.

The loss was a major setback to a long-standing vendetta against Nevil Hulett & Quaysyde Restaurant organized by Gauteng residents advocate Christo Stockenstrom, attorney Gerhard Dreyer, Jemma Surrier and Rudolph Marx. The time line of the vendetta was as follows:

The supreme court judges in dismissing the appeal address the basis on which the case was based and wrote quite succinctly “paragraph 13: It is clear from the terms of this agreement that the second appellant (Christo Stockenstrom) regarded erf 3306 as having been zoned for business purposes. However, in October 2015, when he learned that a restaurant was being built on the property, he took offence to what he stated in the founding affidavit was ‘an unlawful invasion of the appellants’ privacy and right to peaceful and undisturbed possession of their properties’ likely to disturb the tranquil atmosphere of the ‘peaceful residential character of Marina Village and surrounding residential properties’ – all of which is somewhat rich when one knows that he had known for years the property was zoned for business purposes”.

Some say that Christo Stockenstrom has a “hidden agenda” and he only wants to stop the new On The Quay BnB being built next to him in terms of the approved 2006 Site Development plan. As you can see from theGoogle earth photo on the next page showing the objectors Holiday Homes in Relation to Quaysyde Restaurant & BnB, the On The Quay BnB to be built early 2018, should make Stockenstrom, Dreyer & Surrier happy as Nevil Hulett will have a vested interest not to have Quaysyde Restaurant make noise to disturb the 15 guests resident at the On the Quay BnB.

On numerous occasions Nevil Hulett has offered the Olive Branch to the litigants the latest being, 2 weeks before the SCA appeal, when he informed the litigants that he had been diagnosed with intrusive stomach cancer when he offered both sides covering their own costs and cancelling the court action. The litigants turned down the offer with contempt preferring to continue their vendetta.

Undeterred by losing their appeal it appears that Gauteng residents advocate Christo Stockenstrom, attorney Gerhard Dreyer, Jemma Surrier and Rudolph Marx are determined to continue their vendetta against Nevil Hulett by:

Is it not now time for the residents of St Francis Bay and the St Francis Paddling Club, Swimming Club, Running Club and Cycling Club who use and enjoy Quayside’s facilities to stand up against these out of town property owners and say enough is enough! 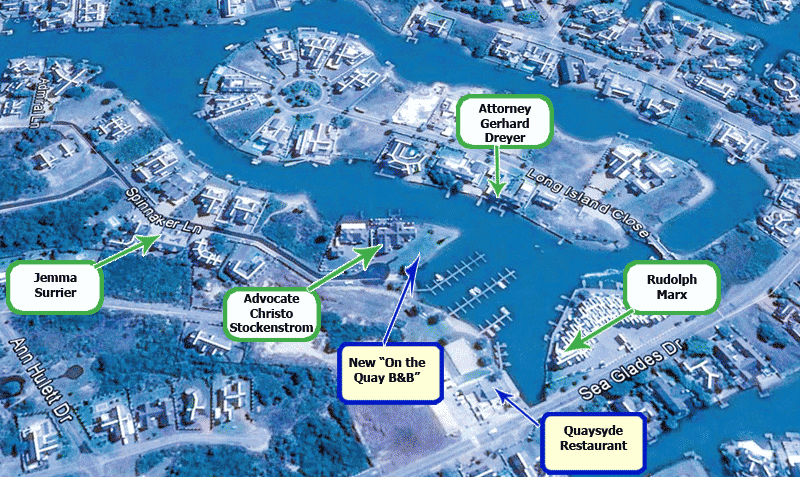