Cooking with Conrad Gallagher – The Evolution Of Food

The Evolution of Food 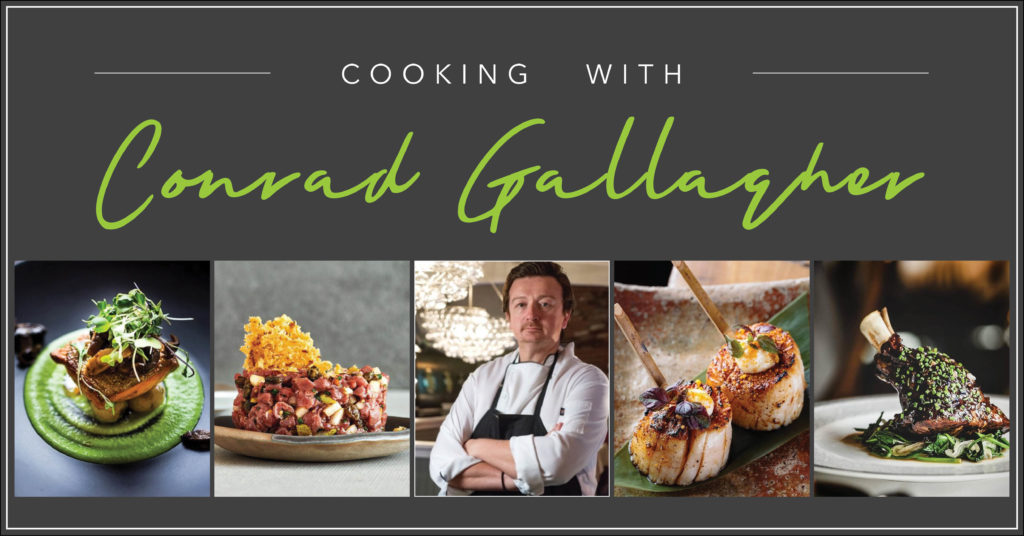 In today’s column, Conrad chats about the evolution of food, and it is food for thought, literally.

Is everything we consume in some way or form, less natural than 50 odd years ago? How did we get here, and how do we go back?

Whilst doing thorough research and completely throwing myself into this article, I discovered something. Everything we’ve come to know starts with food. “Eat to live, don’t live to eat.”- Benjamin Franklin. However, there is something quite serene and captivating when sitting at one’s favourite restaurant, senses aroused with curiosity. The smell of freshly picked arugula lingering in the air, the white noise provided by people laughing, a coffee cup colliding with its saucer, soft lighting on a rainy day and finally, the warmth. Whether the warmth was provided by the amounts of champagne or the privilege of being able to sit serenely at the restaurant La Maison d’a Cote.

On that “champagne infused” note, let’s discuss food history and how it transformed humanity.

Back in the day, before we were classified as “Homo sapiens”, also Latin for “wise man”, we were classified as Homo erectus, which simply means upright man. This evolution was based entirely on how we prepare food. From catching it in the wild and tearing into the flesh of a hare with our teeth to preparing a slither of wolf on a controlled fire, picking on its tissue. However, someone somewhere discovered that there is, in fact, a more civilised manner in which to consume and prepare sustenance.

Suddenly there was a shift, and life as we know it stepped into formation. Our form shaped, we adapted fully to our surroundings. Moreover, the consistent consumption of meat resulted in the growth and expansion of our brains. This counteracted the size of our metabolism, which shrank immensely.

Wise, fit and advanced, we strutted through history.

Of course, food controls everything, along with fermented fruit and tobacco leaves. We were first-hand witnesses of this when the Covid-19 pandemic had its first outbreak at the beginning of 2020. Mankind spiralled out of control, buying produce in bulk, the illicit sale of alcohol and cigarettes, etc. Some humans preferred being paid in bread and beer and being buried with rations thereof to take into the afterlife. We got spoilt. The hunger for receiving and consuming food became a regular part of our day. Or, for some, the only important part of their day, gobbling down a pint of lumpy beer.

How did we get here? Ordering Burger King on Uber Eats. Documenting every meal we consume without even bothering that it’s getting cold because we simply have to get the right angle. We are turning into robotic humans. We live through social media. If there’s no dry ice on my sushi plate, why did I bother coming out in the first place? Just stop for a second and think. What am I putting in my body, and where did it come from? How much effort was put into this meal?

With that being said, there seemingly has been a change of some sort. The new generation has had an immense influence on the well-being of humans, animals, and the planet. For example, we started replacing regular milk with plant-based milk, healthier eco-friendly options, free-range options, etc. In addition, there is a newfound appreciation when it comes to fine dining, seeing each dish as a piece of art.

Organic simplicity is how we go back. Our generation wants to do good whilst looking good, and “eating clean & staying lean” is the ultimate motto for the 21st century.

We are “Homo sapiens”, and to provide an answer to the question asked at the very beginning of this blog, No, we are, in fact, more natural food-wise than we were 50 odd years ago. If there is one thing humans care more about than food in the 21st century, it is how and where we consume it. This is because we are obsessed with living life a certain way. And when living life a certain way can get snatched away from you at any second, as this pandemic has proven, there is an immense demand for appreciating life and food.

So how do we go back? I’m proud to announce that we’re already on our way.

Tomato and Goat’s Cheese Pizza, with chorizo and rocket

Could This Be The Best Burger Of Your Life?

In wine, age matters – in both vineyard and bottle!