According to Grace Stevens, in her experienced opinion as a baking genius and as a mom, nothing is more important than showing your family how much you appreciate them. Fabulous food is one of the best ways to share the love, and this Father’s Day presents us with another opportunity to show dads how much they mean to us by making them some delicious treats.It is well established that breakfast in bed is a favourite with dads the world over, right after letting him take a well-deserved nap in peace and indulging his dad jokes.

Wake him up from his nap with a cup of coffee and a gorgeous gooey chocolate brownie and you will be well on your way to being his favourite child.

How about putting a slideshow together of all your favourite dad memories and take the time to listen and laugh at all the embarrassing stories about you as a kid.

Grace says that in her household, homemade pizza with dad’s favourite toppings reigns supreme as the perfect father’s day meal. Throw in a giant mug of hot chocolate to sip in front of a roaring fire and you have yourself the perfect day spent with dad.

Grace says that unfortunately some dads feel underappreciated, and her husband says sometimes he feels like an ATM because the kids only talk to him when they need money. Father’s Day is a great way to remind your dad that that you notice all the love and care he gives you and are thankful to him for sacrificing that sports car so you could have all that our hearts desire. 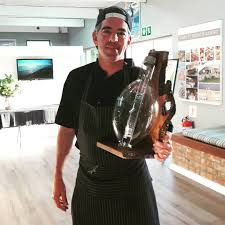 Local Chef’s Jean-Pierre De Meillon or just ‘JP’ as he is known to most who have tasted his delicious fare whilst head chef at Cape St Francis Resort and more recently Full Stop Cafe. Famous for his calamari dishes including his Calamari Three Ways whilst at the Resort (he won the inaugural Calamari Challenge at the Calamari Festival  a couple of years back) and probably the best hake & chips north of the lighthouse. His move to Full Stop Cafe across the road from the resort has seen him take the pizza business to a new level in these parts and just prior to the lockdown, Full Stop Cafe was running a R79 Pasta special every Thursday and one of the first pasta dishes that this scribe savoured was the very dish featured in the video below.  DELICIOUS!

We can’t wait to have this lockdown over JP so we can again have a taste of your great cooking enjoyed of course with a Car Park John draft beer.

Some information posted on social media that some traders may have missed.

In a proactive move, restaurateurs in the St Francis area met at the Links on Friday morning to compare notes and combine efforts in prevention and management of the uncertain times we currently find ourselves in. Hours affected by new liquor trading regulations, interpretations of the regulations (with the help of the Restaurant Association of South Africa), the slowdown in business, staffing, suppliers and an uncertain future was discussed.

The positive outcome was that our guests may rest assured that restaurateurs are taking this pandemic seriously and are doing everything in our power to safeguard our patrons. Covid-19 has hit the hospitality industry hard and there are ways in which you can assist with the livelihood of those in the industry including their employees.

Please support them by making use of limited trading services and take-aways on offer. Many are even offering free delivery services. And respect the new regulations which everyone agrees must be adhered to: When last rounds are called, let’s not challenge the managers or staff. It’s good to see local business stand together during this time of crisis. We will continue to meet as the Coronavirus unfolds.

Should you wish to publish your take- away menu online St Francis Today will happily publish it at no charge on a section of the newsletter we are creating for these menus. For more information call Colin on 082 554 0796 or mail colin@stfrancistoday.com. Menus can be in MSWord format, as PDF’s or Jpegs / PNG format.

Your choice tonight for just R79

Do holiday crowds cause locals to hibernate?

There certainly could be a good argument that when the holiday crowds arrive some locals disappear into their hibernation burrows waiting for the crowds to go before reuniting with their fellow St Franciscans. But it seems some need a major occasion to arise and reunite and what better than a good offer –  Half Price Pizza? And so many familiar faces were to be seen at Full Stop Cafe last evening.

The popular Full Stop half price pizza was re-introduced after a two month break over the season saw friends and families reunite in their masses at Full Stop Café. Other restaurants offer specials after the season but none appear to attract quite the crowd that Full Stop Café seems able to draw to partake of their great pizza menu. And it is not only about pizza for their burgers too are among the best you will taste anywhere.

What is now Full Stop Café  certainly has transformed itself over the years from a rather dingy little pub, Stix, five or so year ago to a popular music venue / restaurant / pub, Rock Lily for a few years and a little more than a year ago, into a bright, airy and  popular family friendly eatery. The large garden offers a safe and secure child friendly playing area complete with a jumping castle, water fountain and jungle gym where kids work off their energy leaving their parents free to enjoy their pizza, burger or one of the other choices  off a really nice menu. And talking of kids it really is a great venue to hold a kids birthday party. Not bad for a 60th or 70th celebration either!

AND AT THE LINKS TONIGHT

If you missed the pizza evening, St Francis Links is having one of their famous curry evening this evening at just R for a choice of Bombay Chicken Curry, South African Lamb Curry and Butternut & Lentil Curry. Delicious!

AND FOR SOMETHING TOTALLY DIFFERENT

Sarah-Jane at Dune Ridge has introduced a new daily menu, yes the menu is changed daily and offers the discerning diner some truly exciting fare. Those who have yet to visit Dune Ridge, it truly is worth the drive. The short stretch of dirt road sets the scene for your visit into the country and it has to be one of the loveliest dining venues in the area. Give it a try!

Diners Club is celebrating its coveted Winelist Awards with events in the Western Cape, Gauteng, Kwa-Zulu-Natal and Eastern/Southern Cape this month: The Eastern and Southern Cape and Klein Karoo winners were announced at a function at Monet’s at Fancourt, George.

The Diners Club Winelist Awards have honoured the best wine lists in the country for over two decades and attract restaurants eager to gain recognition for the energy and attention they put into their wine lists. 2019 saw a year-on-year entry growth of over 10% – this reflects that an ever-growing number of establishments and patrons appreciate that the perfect meal is greatly enhanced by a fine wine to match.

This year, 205 restaurants from around the country submitted wine lists for judging by a select panel led by publisher of the Platter’s by Diners Club Wine Guide, Jean-Pierre Rossouw.

“It’s clear that dining establishments are giving their wine lists ever-more attention, and a trend that I’d really like to applaud is the growing number of wine stewards and sommeliers that curate and present the lists,” says Rossouw. “It’s also encouraging to note the number of establishments offering a wider choice of wines by the glass.”

The Diners Club Winelist Awards are a benchmark for excellence in the restaurant industry and it was encouraging to see as many as 47 restaurants countrywide achieving Diamond status this year.

Diners Club has a long history of supporting the wine industry. The response to this annual competition confirms the high standard of restaurants around the country and the significant choice our cardholders have when it comes to eating out.