NSRI are appealing to bathers, paddlers, body borders and surfers to be cautious along the Southern Cape coastline and the Eastern Cape coastline, in particular around the coastline of Plettenberg Bay and between Mossel Bay and Jeffreys Bay, due to a high number of reported White shark sightings and White Shark close encounters.

The increase of sharks at this time of the year is part of the normal aggregation of these animals that take advantage of natural prey like seals and fish close in shore.

A large amount of shark sightings and some encounters have been reported close in shore along the Plettenberg Bay coastline over the past few weeks, on Sunday and today.

Drone footage of a large White shark in close proximity to surfers in Plettenberg Bay on Tuesday highlights the urgency of this safety appeal.

Sarah Waries of City of Cape Town (CoCT) Shark Spotters programme has told the NSRI “The behaviour seen in this drone footage shows that the shark is aware of the surfers and is investigating the surfers. It is important for people to remember that White sharks are naturally inquisitive Apex predators and that although shark bites are rare, water users must understand the inherent risk associated with sharing the ocean with these animals and change their behaviour accordingly to avoid encountering sharks.”

To reduce the risk of encountering a shark the public are urged to familiarise themselves with the following safety advice:

On arrival at Queen Mary 2 the doctor, wearing full PPE (Personal Protective Equipment), was transferred onto the ship and following the sample tests that were collected the doctor was transferred back onto the sea rescue craft and brought back into the Port of Durban without incident.

All precautions, PPE and protocols as outlined by the Department of Health were followed during the operation.

The sea rescue craft Rescue Free Runner and Rescue Airlink were launched but as they were responding it was confirmed that all 3 casualties were out the water, but an adult male was suffering from exhaustion and required medical attention.

All of them managed to get out of the water safely before NSRI arrived on scene.

Another reminder that with the beautifully hot weather and warm seas we have been enjoying always ensure you swim in areas where there are lifeguarrds on duty or others in the vicinity should an emergency arise.

The whale, appearing to be in poor health, was attended to on the scene and Bay World Marine Scientists assisted with advice and DEFF (The Department of Environment, Forestry and Fisheries) were alerted.

The whale was loaded onto a back-board and transported to deep sea off-shore of Oyster Bay on our sea rescue craft Pierre Oyster Bay 1 and the whale was released.

The whale appeared to swim away once it was released and as a precuation NSRI monitored the coastline.

Later, on Sunday, the whale beached again at the Eastern Rocks of Oyster Bay Beach.

DEFF and Bay World were contacted and on examination, finding the whale to be in poor health, arrangements were made and the whale has been humanely euthanized.

Samples of the whale have been collected for Bay World and DEFF.

NSRI commend the public for their concern.

Boy critical after near drowning at Oyster Bay 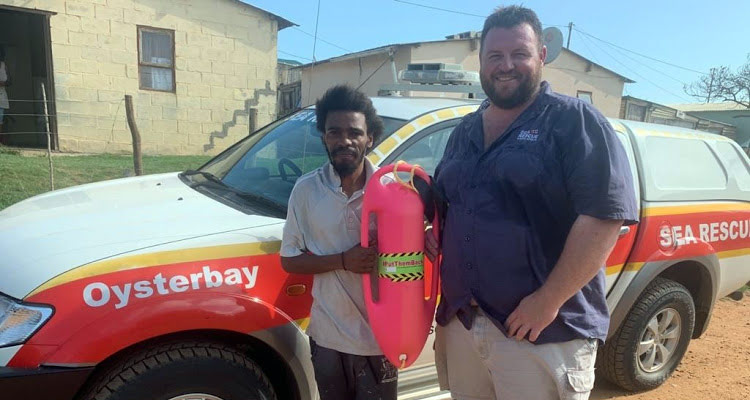 NSRI Oyster Bay duty crew was activated early afternoon on Monday (13th) to investigate reports, from an NSRI coast watcher of children launching into the surf with the NSRI Pink Rescue Buoy. Concerned as to why the buoy was being used he alerted NSRI.

Station Commander Lodewyk van Rensburg happened to be nearby and immediately proceeded to main beach and immediately established that a group of seven local males (three teenagers, three children, and an adult, their uncle) had been caught in rip currents while swimming.

Three of the children and one of the teenagers were not too deep and had managed to escape the rip and get to shore safely. The other two teenagers, both aged 14, had however been swept out to sea.

The uncle, Ricardo Kettledas, had instructed the children to go and grab the pink buoy for him and he launched into the surf with the pink buoy. He was able to rescue one of the teenagers and bring the now unconscious boy ashore showing signs of non-fatal drowning.

When van Rensburg arrived at the scene he placed the rescued boy in the recovery position but discovered the other boy was still missing in the surf.

Knowing that additional sea rescue crew were due on the scene within minutes van Rensburg left the teenager in the recovery position in the care of the other boys and he, with Kettledas, launched into the surf. At the backline they were able to reach the remaining teenager who was lifeless in the water.

Kettledas still had the pink rescue buoy with him, and assisted by the pink rescue buoy the teenager was brought to shore. Once on land van Rensburg immediately commenced with CPR (Cardio Pulmonary Resuscitation) efforts on the boy who was not breathing and had no pulse.

Private Care ambulance services had already been activated and the NSRI duty crew arrived on the scene and a pulse and spontaneous breathing was restored during CPR efforts and the teenager was taken into the care of paramedics . He and the first teenager were transported to hospital by Private Care ambulance with both boys in a serious condition. The first boy is recovering but the second at time of publishing was still in ICU in a Port Elizabeth hospital in a serious condition.

Skiing Accident on the Kromme

NSRI St Francis Bay duty crew was called into action on Sunday evening following a request for assistance from an NSRI Oyster Bay crewman, on the Kromme River in his private boat, reporting a teenager injured while water-skiing on a knee-board on the river four kilometers upstream.

The NSRI Oyster Bay crewman, Marc Mans, had witnessed the accident and using his private boat had gone to the aid of the male teenager and alerted NSRI St Francis Bay.

Marc had secured the teenager onto a board, removing him from the water, and taking him onboard his boat. The teenager was then taken to Marc’s housing complex where NSRI St Francis Bay medics and Private Care ambulance services rendezvoused with them. From there the teenager was taken into the care of paramedics and he was been transported to hospital by Private Care ambulance in a stable condition, accompanied by his dad