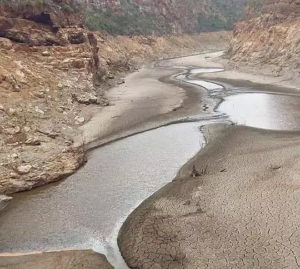 Kouga Municipality has started distributing bottled water to Hankey as many households in the town have not had access to tap water at all, even during the advertised hours. Mayor Horatio Hendricks said that despite the introduction of water rationing, Hankey was still using more than its allocation.

“This means that more water is being extracted from the reservoir than is flowing in. As a result, some households, especially those in high-lying areas, have not had access to tap water at all.”

Affected residents are invited to pick up one 5 litre bottle per household per day from the Vusumzi Landu Hall or Hankey municipal offices. Water can also be collected from the rainwater tanks that were installed earlier this year. According to the latest figures,

“We know it hasn’t been easy for the affected communities,” said Hendricks.

“There are households at Hankey where very little or no tap water has been available, even during the advertised hours, because the water is extracted from the pipes faster than they can fill up when the supply is turned on.  The usage in this town has also been above the quota, which contributes to the shortages as the Gamtoos Irrigation Board turns off the supply once the quota has been reached. We would like to appeal to residents to minimise how much water they use when the supply is restored so that the pipes can fill up and the supply reach more households.”

Meanwhile, donations have started pouring in for the drought-stricken communities.

“Companies and organisations from across the country have been in contact with us to say that they would like to donate water,” he said.

“The first big donation, from Dischem’s offices in Cape Town, arrived on Tuesday. We would like to thank them for showing such amazing compassion for the communities of Hankey and Patensie.”

Those who would like to donate bottled water can contact Gert Kruger at the municipality’s Infrastructure and Engineering Department on 081 528 3721 to arrange delivery.

The level of the Kouga Dam level stood at 6,88% on Tuesday, 14 August. This is a slight improvement from the 6,73% on Friday thanks to the weekend’s rain.