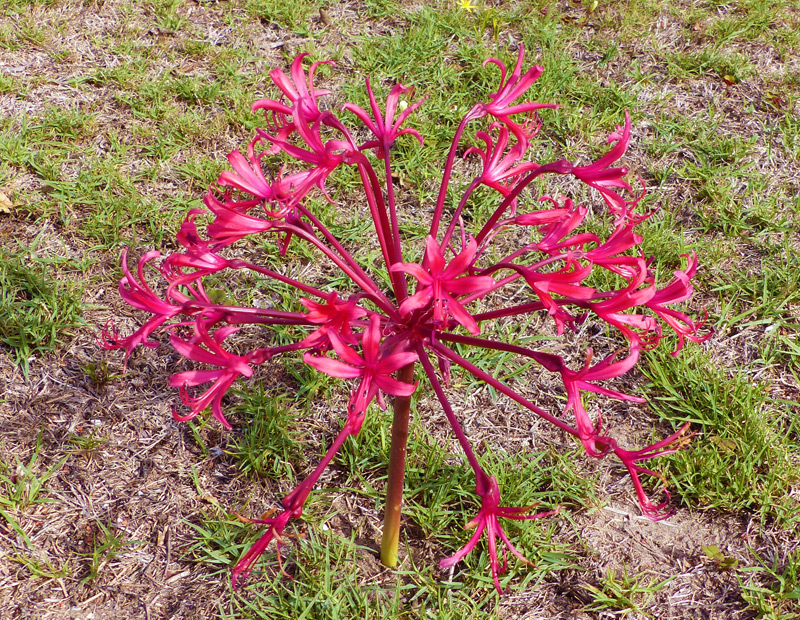 It is that time of the year again when one of the special plants of the Kouga area has raised its beautiful pink inflorescence above lawns, verges, and pavements and is nearly over. Now is the time to make sure that they do not disappear for good as they need to be protected even after flowering.

These plants are worth saving for their great beauty but unfortunately have become highly threatened because of urban development, alien invasion, and ignorance. They are in danger of dying out if people, new to the area, are not informed about them and botanists and plant lovers hope that with more awareness their disappearance may be halted.

There are two species of Brunsvigia which belongs to the Amaryllidaceae family. The larger one, Brunsvigia litoralis, with erect leaves, is restricted to a very small area and is not commonly seen whereas the smaller one, Brunsvigia gregaria, is more widespread. Both should be preserved.

The Brunsvigia plant has a large bulb with a particularly beautiful inflorescence. The latter consists of about 20 to 30 pink, to deep pink or crimson flowers on a stalk rising straight out of the ground, without any leaves being visible. The flowers usually appear above ground in autumn. After flowering, the dried inflorescence breaks loose in one piece and blows around like tumbleweed.

The flower should be left to dry naturally so that the seed can set and then be dispersed by wind. Gardeners are advised to mow around the flower to let it dry naturally. The plant can be propagated by planting the seeds.

After flowering, when the plant is building up growth for the next flowering period, the leaves come out (in the case of Brunsvigia gregaria) as two flat leaves (close to the ground) looking just like weeds to those not familiar with the plant. Gardeners often dig them up, not knowing what they are, so a wonderful treasure is lost.

“It is actually an offence to dig up Brunsvigia, or any lilliacae plants,” says Caryl Logie, a local botanist. “If they need to be rescued for any reason, a permit must be obtained from the Department of Environmental affairs in Aston Bay (telephone 042 292 0339).”

Questions regarding these plants may be directed to Caryl Logie on 042 294 0588.

Lawn with Brunsvigia gregari some years back