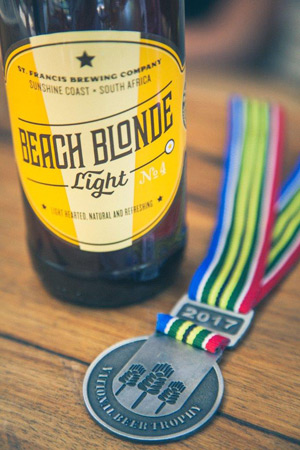 It is that time of the year when beach blondes are not only a dime a dozen on our beaches but also a popular, thirst quenching beer in several of our taverns. News thus of St Francis Brewing Co’s  Beach Blonde Light winning Best Beer in the Pilsner category at the 2017 National Beer Awards is certainly great for this really great beer that has some of it’s roots firmly planted in St Francis..

Lance Kabot of St Francis Brewing Company  spent time in the United States some years ago working at La Jolla Brewing Co in San Diego where he had an interst in the recipe which he brought back to South Africa with him. “The beer fits the climate of SA as well as did California’s, light in calories and alcohol, it is an easy drinking and thirst quenching beer, perfect for a hot summers day.

Having received the acclaim from a panel of BJCP certified judges Beach Blonde has now attracted the attention of a large distribution company and the deal signed will see Beach Blonde Light in bottle stores nationwide in the coming year. The exciting new label and 330 ml bottle will be launched at the Brewery in December.

Although Beach Blonde is in a different class hopefully the bottled Beach Blonde will be a little cheaper than out of the tap for if won’t capture market share from Castle Light and Corona to those who are more price conscious as the cost per 375ml comparison are quite sifnificantly cheaper.

But pop in at St Francis Brewing Company where Lance will be only too happy to explain the intricacies of some of the craft beers on his menu.

Some of Lance’s Craft Beers