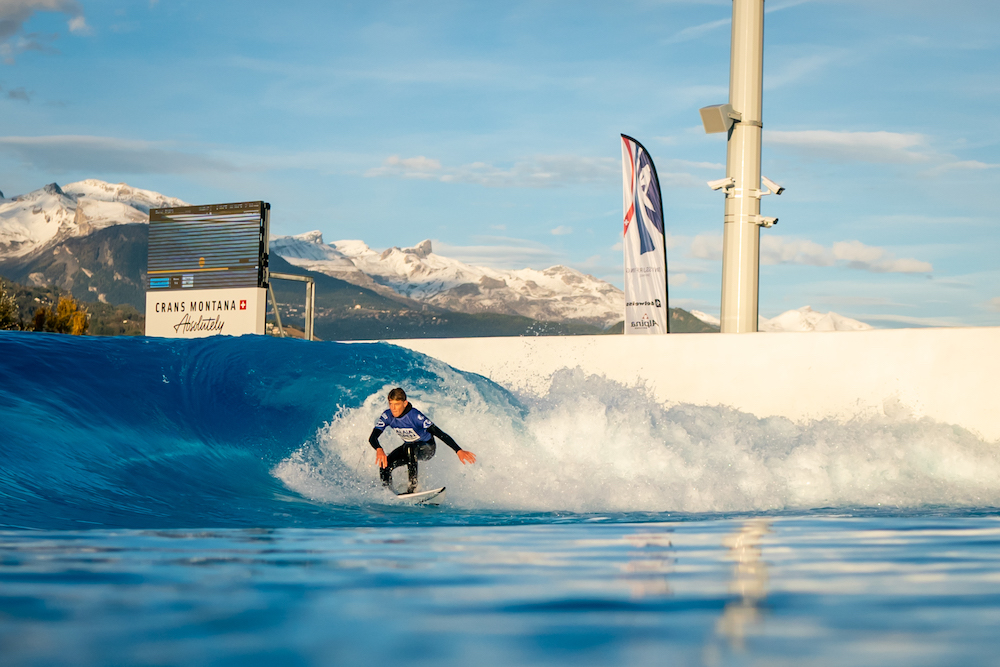 Open men’s Finalists © Maxime Schmid
Alaïa Bay, Sion – It was an action-packed final day at Alaïa Bay for the second edition of the Alaïa Open Winter Cup. But, despite the frigid 10-degree water, the surfing was red-hot and a testament to the amazing wave quality that Alaïa Bay produces.

The Open Men’s Final was an incredibly close affair, with the lead changing a few times. Yago Dominguez from Basque Country has been the on-form Open Men’s surfer throughout the event. Still, in this final display, the powerful Brazilian goofy-footer Michel Roque put on an amazing show of aerial surfing and lightning-fast lip hits to snatch victory.

Roque opened up with a full air rotation and a series of powerful whips off the top for an opening ride of 8.73. However, he backed this up with an incredible left-hand, where he performed a series of fast and powerful turns off the top. Executed with speed, power, flow and variety for a 9-point ride and victory with a 17.73 tally. In addition, Dominguez was the runner-up with 16.50 points to his name. While surfing in his second final, Lukas Skinner came in a respectable third place and German surfer Dylan Groen in fourth place.

The Open Women’s Final was one of the closest heats of the entire event, with the lead changing hands throughout the final.

The Basque Country surfers, Janire and Annette Gonzalez Extbarri were going toe-to-toe throughout the final. Both were surfing with skill and precision. However, Anat Lelior from Israel was fighting hard and was also in the game for a possible win. It all went down to the final exchange. At the end of the final, it was Janire Gonzalez Etxbarri with the win, with Anat Lelior in second. Furthermore, the scores were incredibly close, and Janire took victory by a mere .07 of a point against the Israeli surfer. Annette Gonzalez Extbarri was third, and Noah Klapp was fourth.

The Junior Girls’ final was an exciting affair. Maria Salgado from Portugal was on fire and was the clear winner with 15.33 points in her tally. She had all the other surfers in the final in a combo situation, with all three needing two waves to get in the game. At the final siren, it was Salgado in first with Lila Skinner (UK) in second place. Fabiana Klein (SUI) and Vera Oliveira from Portugal finished third and fourth, respectively.

One of the most competitive divisions in the entire event was the Junior Boys division. The final was action-packed, with the juniors going all out to win the contest. In the end, Lukas Skinner (UK) emerged victorious with an excellent display of high-performance surfing for a heat total of 18.33. His rides consisted of an incredible 10-point ride with a clean rotation followed by two powerful hits for the perfect score. Combined with a follow-up 8.33 ride and he had the decisive win. In addition, the runner-up was Rivan Rock Rosskopf, with Killian Rosskopf and Antione Habashi in third and fourth positions. All three of these surfers are from Switzerland.

“It was super cool to come to Alaïa Bay in Switzerland to compete, and it was such a great atmosphere here in Alaïa Bay,“ said Skinner after the results were announced. “Also, I think it was also great to see the progression of the Swiss surfers. It was good to surf against surfers like Michel and Yago. Furthermore, I was getting such high scores because I was getting pushed by them.”

Photo Of The Day – Switzerland Wave Pool At Full Output