It was a crazy time, late 2020. We were stuck in Covid time-warp; the government has banned ciggies, booze, open-toed shoes, roast chicken and sleeveless vests unless we wore them under a jacket.

This guy, Max Hurrel was making epic videos of our government members going mad with power, and his tunes were getting massive recognition, especially with his smash hit ‘Zol’

Former St Francis Today editor, the late Colin Watt and I were working on our little project called The West Wind, a digital community magazine. We enjoyed laying down some fresh content for the community and were enjoying trying some new digital formats.

Then Colin’s machine got hit by some trojan virus. I had some personal issues to attend to in Cape Town. Among the confusion, we lost the first five issues of The West Wind to a faulty hard drive.

It was a bummer, but we continued and went on to publish issue 6 on a different platform and forgot about the first 5 issues.

Granted, they weren’t perfect, but they had sentimental value. We were both proud of our little venture, and it was fun working on the magazine.

Recently, while transferring the entire website from the USA to our local server DNA in St Francis, the missing files reappeared as if by magic. So now issue 1 to 5 have been reinstalled and are available to view should you want to.

This is issue 2. It does take a little bit of time to load, but if you’re interested, it is pretty good to relook at what was happening back then, in the middle of the end of the first wave of the pandemic. 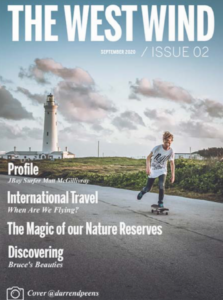